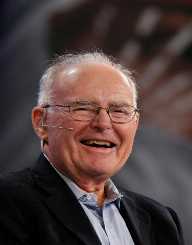 Gordon Moore is an American businessman and author born on 3rd January 1929. He was among the founders of Intel Corporation. He then became its chairman Emeritus a position he still holds. He also came up with Moore's law which was of great impact to the field of science. Some of his associates include Robert Noyce, a great business person. He was also involved with a group known as the Traitorous Eight. The eight of them worked for Fairchild Semiconductor Corporation. During his studies, Gordon Moore majored in chemistry. He even took his Ph.D. studies in chemistry while he minored in physics. His contributions during his career earned him some awards. He was for instance presented with the Othmer Gold Medal in 2001 among others.

Not much is known about the early life and childhood of Gordon Moore. The little known is that Gordon Moore was born on 3rd January 1929. His place of birth was San Francisco in California.

During his schooling days, Gordon Moore attended Sequoia High School in Redwood City. He was then admitted to the San Jose State University. He later joined the University of California in Berkeley. He majored in chemistry. By 1930 he was through with his studies at the university. He then attained his degree in the subject.

Immediately after his graduation, he took his Ph.D. studies in the California Institute of Technology- Caltech. He studied physics and majored in chemistry.  In 1953 he did his postdoctoral research in Applied Physics Laboratory. John Hopkins University in Baltimore owned the lab. Meanwhile, he attained his Ph.D. in 1954. He was through with his postdoctoral research by 1956.

Gordon Moore began his career while working with a physicist known as William Shockley till 1957. The two worked in Shockley Semiconductor Laboratory of Beckman Instruments Company. When they parted ways, Gordon Moore left with seven others from the company. They were then given the name “Traitorous Eight.” The team then joined Fairchild Semiconductor Corporation with the help of Sherman Fairchild, an entrepreneur. In 1965, Gordon Moore became the director of the company’s research.

He was the mind behind the observation which later became the Moore’s Law. In April 1965 the law was published by Electronics magazine in one of its articles. He slightly altered this observation after conducting many types of research. The changes brought significant impact to the semiconductor industry.

In 1968, Gordon Moore co-founded NM Electronics which was later renamed Intel Corporation. He was assisted by Robert Noyce, a great business person. He was appointed the Executive Vice President of the company. In 1975 he was appointed as the President. From 1979 to 1987 he also served as the company’s Chief Executive Officer. During this time he was a member of Caltech.

In 1991, he became a member of Gilead Sciences, a biotechnology company. He was initially with the Business Advisory Board before the company appointed him to be on the Board of Directors. In 1993 he served at Caltech as the Board of Trustees’ chairman. He still works at the institute as its life trustee. He later became the Chairman Emeritus of the Intel Corporation. In 2000, he founded the Gordon and Betty Moore Foundation with assistance from Betty, his wife.

Gordon Moore had the privilege of acquiring membership in the National Academy of Engineering in 1976. In 1990, he received National Medal of Technology and Innovation from President George H. W. Bush. In 2001 he was presented with Othmer Gold Medal. Later in 2002, he received Presidential Medal of Freedom. In the same year, he was also awarded the Bower Award. In 2008 he was honored with IEEE Medal of Honor followed by Future Dan David Prize.

Gordon Moore tied to knot with Betty Whitaker in 1950. They are blessed with two sons: Steve and Kenneth.