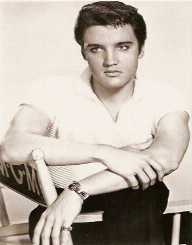 Elvis Presley was born on January 8, 1935, in Tupelo, Mississippi, USA. His parents were Vernon Elvis Presley and Gladys Love. Elvis also had a twin who was stillborn named Jesse.

The Presley family came from humble beginnings. The family was weaker than most, but their faith in God guided them through life. They lived a peaceful life, pouring their hearts and souls into their religion. The family was members of the Assembly of God Church near their home. It was at church that Elvis gained his sense of morality, his love for his God, and his inspiration for music. Some of his other musical inspirations included Jake Hess and Ted Daffan.

Elvis’s love for music was evident even when he was a young boy. He gave his first public performance when he was ten years old at the Mississippi-Alabama Fair. He only sang as he did not know how to play the guitar yet.

Elvis loved to listen to music so much that his parents bought him his first guitar when he was twelve years old. From then on, he got lessons in music and guitar playing from his family members and the pastor at his church. The same year, he was invited to the local radio station to play and sing live on the air.

Elvis Presley graduated from high school in 1953, when he was 18 years old. By this time, he already knew that he would go on to pursue music as a career.

Elvis spent the rest of his career making chart-topping music. His crazy new dance movies, moving lyrics, and swinging blues and gospel tunes helped me to become the King of Rock. Below are some of his most famous songs.

Elvis’s famous singing career lead way to acting. It was in 1956 that he starred in his first movie, Love Me Tender. This movie was a hit and made way for Elvis to star in many more films, which also featured his songs. He starred in over 30 movies, and some of his most famous ones are listed below.

During his life and after his death, his famous songs were used and still are used in films. Even children could hear his songs in the famous Disney movie, Lilo, and Stitch. This movie was set in Hawaii, where many of Elvis’s movies were based.

Elvis’s career as a singer and actor came to a standstill when he was drafted into the army in 1957. Elvis Presley served about a year in Germany. When his mother died, Elvis was allowed leave to go to the funeral. Afterward, he went back to the army in Germany and served until 1960. When he was finally out of the service, he produced an album which was inspired by his time in the military called GI Blues.

While in the army, Elvis Presley met a charming girl who stole his heart named Priscilla Beaulieu. The two did not marry until 1967, though.In 1968, the couple had a child together named Lisa Marie. However, the marriage was not made to last. The two divorced in 1973, and Priscilla had sole custody of their child. Elvis never remarried or had other children.

Elvis Presley was known to be using many different medicines by the time of his death. He was addicted to them during his marriage, which is part of the reason it ended so badly. He was also struggling with weight gain, which may or may not has been related to his drug use.

These drugs caused health problems and eventually lead to heart failure, which was the cause of his death. He was found dead on the toilet in his Graceland home in Memphis, Tennessee. He was only 42 when he died on August 16, 1977.

When Elvis Presley died suddenly due to drug use and health issues, fans all over the globe were shocked. Many fans doubted that the great king of rock could pass so swiftly. Soon after his death, a conspiracy theory started to circle, saying that Elvis Presley had faked his death and was still alive, living the life of an ordinary man instead of the presence of a rock star.

One theory states that Elvis just wanted to get out of the limelight, while other darker methods suggest that he had to fake his death to protect his family from criminals.

Every few years, a fan will snap a picture that looks like an older version of the Elvis they knew and loved, and the conspiracy gains new strength. However, since Elvis Presley would now be over 80 years old, some conspiracy theorists settle for the argument that Elvis is dead now, but that he didn’t die in 1977.

Over the years, many news articles, newscasts, and even books have been written on the subject. Many fans still swear that Elvis is always alive and well, and some also think he now goes by the name Jesse.