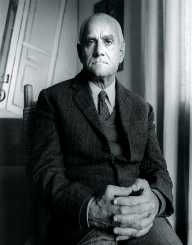 Alberto Pincherle was born in the city of Rome, Italy, on November 28, 1907. His father, Carlo, was an architect of Venetian Jewish origin. His mother, Teresa de Marsanich, was a woman of Dalmatian origin. He came from a wealthy family with important political connections. His maternal uncle was a secretary in the National Fascist Party. His paternal cousins founded Giustizia e Liberta, an anti-fascist resistance movement.

When he was nine years old, Alberto contracted tuberculosis of the bone. He was confined to bed, so he spent most of his time reading. He lived in a sanatorium in the town of Cortina d’Ampezzo for a few years. When he started his career, he took the pen-name Moravia, his grandmother’s maiden surname.

In 1927, Alberto started publishing his short stories in the magazine 900. The stories included Apparizione, Cortigiana stance, Il Lladro curioso, and Delitto al Circolo del tennis. In 1929, he published his first novel Gli indifferenti, or The Time of Indifference. The story depicted the life of a middle-class mother and her two children. In 1933, he co-founded the literary review magazines Oggi and Caratteri.

He also began writing for the daily newspapers La Stampa and Gazzetta del Popolo. In the following years, he wrote several novels, such as Agostino and La Maschera. The Fascist government banned and destroyed many of his works.

After World War II, he started writing for newspapers like Il Corriere Della Sera and Il Mondo. In 1947, he released a collection of short stories, called L’amore coniugale. In 1951, he published the novel Il conformista, or The Conformist. The story depicted the life of a Fascist government official. In 1953, he founded a magazine called Nuovi Argomenti.

Alberto also started writing film reviews for the magazines L’Espresso and L’Europeo. In 1957, he published La circa, a novel about a mother and daughter struggling during the war. He then released several more novels, including La Noia, L’attenzione, Io e Lui, Un Altra vita, and others. From 1959 to 1962, he was the president of the global association of writers, PEN International. In 1966, he co-founded the stage production company Il porcospino.

In 1969, he published a collection of short stories, called Una Cosa e Una cost. In 1975, he released a collection of non-fiction essays, called Al cinema. He continued with the books La vita interior, Impegno controvoglia, and La Cosa e Altri racconti. His last two novels were called La villa del venerdi e altri racconti and Il Viaggio a Roma. Many of Moravia’s novels were adapted into Italian and French films.

Alberto won the Viareggio Prize, the Strega Prize, Premio Mondello, and Premio Marzotto. He received thirteen nominations for the Nobel Prize in Literature.

Alberto passed away in Rome on September 26, 1990. He was 82 years old. His body was buried at the Campo Verano cemetery.