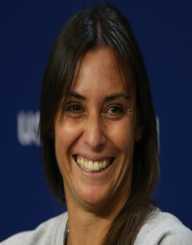 She has won Women's Tennis Association (WTA) singles titles including the 2014 Indian Wells Masters. She retired from tennis in 2015 after winning the US Open. Throughout her career, she defeated several top-seeded and Grand Slam Champions including Martina Pierce, Victoria  Azarenka, Justin Henin, Maria Sharapova, Venus Williams and Svetlana Kuznetsova among several others.

Flavia Pennetta was born on February 25, 1982, in Brindisi, Italy. She was born to Oronzo and Concetta Pennetta. Her father taught her how to play tennis at the young age of five alongside her older sister Georgia. She admired Monica Seles as she was growing.

Flavia Pennetta started playing in the ITF Women’s Circuit in 1997. She was eliminated at the second round during the qualification tournament for the 1998 WTA Tour main draw, the Internazionali sFemminili di Palermo.

However, she won two singles titles and two doubles on the ITF circuit in 1999. Flavia Pennetta with fellow Italian Roberta Vinci won the 1999 French Open in girls’ doubles. She was seventeen years at the time. After several failed attempts, she made a debut main draw WTA Tour match in 2002 at the Cellular South Cup. She was ranked No. 100 in the top 100 on September 23, 2003. In her professional career, she won awards from the time she took to tennis to the period she retired.

At the 2004 Orange Prokom opened in Poland, she broke through with her inaugural WTA victory. In 2005, she again won the singles titles at the Copa Colsanitas and the Mexican Open and teamed with Russia’s Elena Dementieva to win the JP Morgan Chase Open and place second at the U.S. Open. That year, she ranked No. 23 in the world.

After her performance in 2005, Flavia Pennetta underwent wrist surgery the following year, therefore, making her unable to compete but in 2007 Bangkok Open. She defeated Venus Williams at the third round of the 2008 French Open but lost to Carla Suarez Navarro in the fourth round. She posted two more singles titles and doubles championships along with strong quarterfinal showing at the U.S.

Open in 2008 Flavia Pennetta defeated Stefanie Voegele in the first round and went through to the quarterfinals losing to Dinara Safina. This was her best singles performance at a Grand Slam tournament. In 2009, she was at the finals of the Abierto Mexicano Telcel in Acapulco but lost to Venus William in two sets.

Flavia Pennetta partnered Argentina’s Gisela Dulko in a doubles play to win the 2011 Australian Open. This was her first career Grand Slam doubles title. She was the only player at the time to earn the No. 1 ranking in doubles. Unfortunately, she had to be operated on the same wrist in 2012 but found her form again in 2013 and won the 2013 HP Open doubles tournament with France’s Kristina Mladenovic.

Flavia Pennetta once again claimed the then biggest singles win of her career at Indian Wells in 2014, knocking off China’s Li Na and Poland’s Agnieszka Radwanska, both Top 5 players along the way. She paired with Switzerland’s Martina Hingis to win the notch titles at the Kremlin Cup and Wuhan Open, along with a runner-up finish at the U.S. Open. In the 2015 US Open, she made it to the quarterfinals, the sixth in seven years defeating JarmilaGjdosova, Monica Niculescu, Petra Cetkovska and Samantha Stosur on the way. In the semifinal match, she defeated Petra Kvitova in three sets and also beat second seed Simona Halep in straight sets to reach the finals.

In the finals, she played fellow Italian Roberta Vinci in the first-ever all-Italian Grand Slam final in the Open Era. Flavia Pennetta went ahead to defeat Vinci in straight sets to win her first US Open title and Grand Slam title. That same year, she said goodbye to tennis In her final words she said, “This is the way I would like to say goodbye to tennis,” she said……. I can’t think to finish a better way. In all, she won 28 WTA titles including the US Open in singles and doubles in Australian Open and Tour Finals.

Flavia Pennetta currently resides at her birth town. She dated Carlos Mova but the two separated in 2007. She refers to her experience in this relationship in the memoir Dritto al Cuore (Straight to the Heart).  She then dated ATP player, Fabio Fognini in 2014 and they engaged the following year. Flavia Pennetta and Fognini married in June 2016 in Ostuni. The couple welcomed their first child Federico in May 2017.