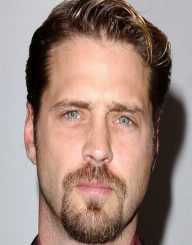 Jason Priestly is a famous name in the American Television industry. His most well-known character is that of Brandon Walsh, in the teen series Beverly Hills 90210. Blessed with good looks and a charming personality, Priestly has been a heartthrob among ladies, throughout his career. People magazine have named him one of the most beautiful people.

Jason Priestly was born on August 28, 1969, in Vancouver, British Columbia, Canada. His mother is the actress Sharon Kirk. Priestly got into acting right from his childhood and continued to feature in commercials and TV shows until his teenage years.

Jason Priestly featured in several favorite TV shows in minor roles. These include 21 Jump Street. MacGyver, and Quantum Leap.
His big break came in 1990 when he was cast in Beverly Hills 90210. His character Brandon became an inspiration for young viewers due to his strong moral values, and Priestly was liked by people of all age groups in his role. This role earned him two Golden Globe Nominations.

Jason Priestly also featured as Fitz, in Call Me Fitz. In 2004, he landed a role in Tru Calling, however, the series was taken off the screen. Lone Monkey, which came out in 2006, suffered the same fate. Priestly’s performance in both the series was highly praised.

Jason Priestly has had minor success in television and independent movies. Some of the films he has appeared in include, Tombstone, Love & Death on Long Island, Calendar Girl, and Die! Mommy Die! He also had a role in a Tony Award-winning play, Side Man in the year 2000.

Jason Priestly has also tried a shot at directing. His most famous accomplishment as a director is the documentary Barenaked, about the band Barenaked Ladies. He has also directed a few episodes of the same show which he was cast in a few years back, Beverly Hills 90210.

Jason Priestly is a racing enthusiast and was a race driver himself. However, his career was cut short following severe injuries due to an accident in 2002. He broke his back and retired after recovery.

Jason Priestly is married to Naomi Laowde. They tied the knot in 2005. His first marriage to Ashlee Peterson lasted only a year, and they had divorced in 1998.

Although Jason Priestly has managed to keep a clean public image, there were two incidents, both related to driving, that have brought him some criticism and physical damage. In 1999, he was involved in a car accident and was found to be drunk driving. He was sent to five days of detention service.

Another more severe accident happened in 2002 that put an end to his racing career. While on the track, his car crashed twice into walls and Jason Priestly sustained major injuries including a broken back. Thankfully, he recovered and continued his acting career.