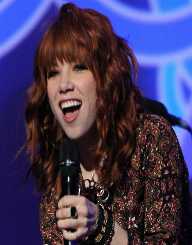 Canadian singer Carly Rae Jepsen was born in Mission, British Columbia on the 21 November 1985. Her parents are Larry and Alexandra Jepsen, and she is one of three children born into the family. Her parents were teachers who encouraged their daughter’s interest in musical theatre.

Carly Rae Jepsen was a pupil at Heritage Park Secondary School and then enrolled at the Canadian College of Performing Arts located in Victoria, British Columbia.

After college Carly Rae Jepsen moved to Vancouver, British Columbia where she worked as a barista, bartender, and assistant pastry chef. Around this time Jepsen was writing music and interested in joining a band when she auditioned for Canadian Idol in 2007. Jepsen was placed third after performing one of her songs, Sweet Talker. Music manager Jonathan Simkin organized a management deal with 604 Records. Her debut single, Denver’s Sunshine On My Shoulders was released in mid-2008 and in September that year, Tug of War, her debut album came out. Two singles reached the Canadian Hot 100 with sales of 80,000 combined.

The EP Curiosity, which came out in February 2012, contained Call Me Maybe which became a worldwide hit. The song reached number one in the Canadian Hot 100 as well as the Billboard Hot 100 in the United States as well the UK/ The single eventually became the bestselling single worldwide in 2012. It was reported on E-News that Calls Me Maybe had been viewed a billion times on YouTube. Her second album Kiss came out in September 2012 and went gold in Canada. Emotion, her third album was released in 2015.

Carly Rae Jepsen has toured extensively and in early 2018 will be opening for Katy Perry on the North American leg of her Witness tour.