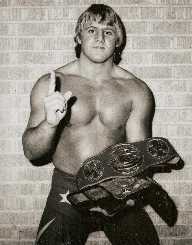 Owen Hart was a Canadian professional wrestler.  He was known by stage names including the Blue Blazer, The Rocket, and The Golden Nugget.

Hart was born on May 7, 1965, in Calgary, Alberta, Canada.  His parents, Stu and Helen, were wrestling promoters and owners of Stampede Wrestling. Owen was the youngest of 12 in the family of wrestlers, including his brother Bret Hart, also known as The Hitman. Hart was trained by his father Stu and competed at the high school and university level.

Owen Hart professional career started after college when he signed on with his father's Stampede Wrestling tour in 1986. It was in 1988 that Hart signed on with the World Wrestling Federation (WWF) Even though Hart's older brother Bret was already part of the WWF, Hart started as a masked wrestler not connected to Bret's established fame. Owen Hart wrestled as the Blue Blazer in matches such as the Survivor Series '88 in a tag team match up.  Hart removed the mask in 1991 before taking part in the World Championship Wresting. Upon Hart's return to WWF, the storyline consisted of a feud with his brother Bret.  The two competed in various matches both individually and in tag teams.

Owen Hart also competed against other wrestlers including Stone Cold Steve Austin, Dwayne “The Rock” Johnson,  and Shawn Michael. Over the course of his career in wrestling, Hart and his family members feuded, formed alliances such as the Hart Foundation, and established dominance in the ring.

Owen Hart married his wife Martha in 1989.  The couple had two children, a son named Oje and a daughter named Athena. They were married until his death.

Owen Hart died on May 23, 1999, in Kansas City, Missouri at the age of 34. His death was due to a fall from the rafters as he was attempting to enter the wrestling ring. The cause of death was declared internal bleeding from blunt force trauma. The accident is said to have been caused by a harness unlatching prematurely, causing him to fall from about 90 feet and hitting his head on the padded turnbuckles.

People who were close to Hart talked about how he was considering retiring from wrestling.  Hart wanted to spend more time with his family, but also to look for employment in another field including teaching.

Owen Hart and his family were also in disagreements with WWF owner Vince McMahon.  Hart's family filed a wrongful death lawsuit against WWF stating that the demands for sensationalism to increase revenue and viewers made the work conditions even more dangerous for the wrestlers, particularly Hart's accidental death.  The lawsuit was settled out of court in 2000.