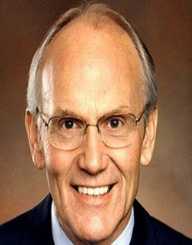 Larry Edwin Craig was born 20th July 1945, to Elvin and Dorothy Craig. He was born in Council, Idaho, in the United States.

Larry Craig studied at the University of Idaho, and he graduated in 1969 with a degree in political science. Craig then went to George Washington University for a time before returning home to the family’s ranch. In 1970 he joined the Idaho Army National Guard, and he served until 1972 at which time he was honorably discharged.

In 1974, Larry Craig started his political career by being elected into the Idaho Senate. He was re-elected for a further two terms in 1976 and 1978. Craig then joined the U.S. House of Representatives by winning a seat in 1980. Craig served until 1991, winning a further four elections.

In 1990, Craig decided to run for a seat in the U.S. Senate when a chair became vacant. He won the seat and then won re-election in 1996. In 1997 he became Senate Republican Policy Committee Chairman, and he held the position until 2003.

In 1982, there were accusations that Larry Craig was one of several congressmen who had been involved in the use of cocaine and having sex with young males in the congressional pages program. He vehemently denied the rumors. In 1999, Craig was very vocal with his criticism of President Bill Clinton when the scandal with Monica Lewinsky broke.

In June 2007, Larry Craig was arrested for lewd conduct. He was charged with soliciting a male for sexual favors in a men’s bathroom at the Minneapolis International Airport. The person he supposedly solicited was an undercover police man.

Craig said he was innocent, but pleaded guilty to one of the misdemeanor charges, a move he later regretted. In September 2007, Craig announced his resignation. He eventually changed his mind and served his term until 2008, at which time he did not run for re-election.

Larry Craig was ordered by the courts to repay $242,535 to Treasury that he had taken for the payment of his defense. Craig continued to stress he was not gay and never had been. Ironically, he had always been vocal when scandals broke out for other politicians. He also voted against same-sex marriage.

After retiring from politics, Craig established his own consulting company named New West Strategies. His partner in the business was Mike Ware, his former chief of staff.

Larry Craig was inducted into the Idaho Hall of Fame in 2007. As the process for selection had taken time long before his arrest, the induction went ahead.

In 1983, Larry Craig married Suzanne Thompson. She had three children from her previous marriage, which Craig adopted.