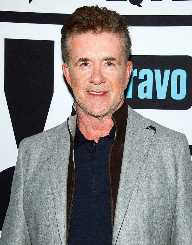 Alan Thicke was born on March 1st, 1947. His place of birth was in  Kirkland Lake, Ontario, in Canada. He was the son of a stockbroker William Jeffrey and a nurse, Shirley Isobel Marie. His parents later divorced in 1953 when he was still a young boy. Subsequently, his mother got married to a p0hycisian named Brian Thicke. The new couple along with Alan then moved to Eliot Lake.

While at Eliot Lake, Alan Thicke began his elementary schooling. Later, he joined Eliot Lake Secondary School. By 1965 he graduated from the school and also became an elect homecoming queen. Alan was then admitted to the University of Western Ontario. While there, he became part of the Delta Upsilon fraternity.

Alan Thicke found great success with his behind the scene roles in the 1970s. In fact, his role in The Barry Manilow Special earned him an Emmy award in 1977. This was his first time to be nominated in that category. In 1978, he was also nominated for two similar nominations for his work America 2Night.

From the mid-1980s, Alan Thicke continued his career with his role in Growing Pains as psychiatrist Jason Seaver. Later, he also began his career in writing while working with the Canadian Broadcasting Corporation. In 1998, Alan began hosting the show The Alan Thicke Show which was received quite well. The show lasted till 1983.

The series Growing Pains concluded in towards the fall of the 1990s. In 2000, Alan Thicke acted a role in The Growing Pains Movie. Later in 2004, he was also cast in Growing Pains: Return of the Seavers and How to Raise Kids Who Won’t Hate You in 2006.

Throughout his life, Alan Thicke wedded three times. In 1970, he tied the knot for the first time to Gloria Loring. The couple was blessed with three sons namely: Brennan and Robin. They then divorced later in 1984.

Subsequently, in 1986, he started a relationship with a 17 years old Kristy Swanson. Two years later, the two got engaged to be married. He was 42 years old at the time.

In August 1994, Alan Thicke married Gina Tolleson, Miss World 1990. She became his second wife. Together they had a son called Carter William. In 1999 the marriage ended in divorce once again.

In the same year 1999, while at Miami, he met his third wife to be Tanya Callau. She was a model. The couple made their union official in 2005 and remained married till Alan left this world.

Alan Thicke took his last breath on December 13th, 2016 at the age of 67 following Aortic dissection. This occurred in Burbank, California in the U.S. where he was laid to rest in Santa Barbara Cemetery.