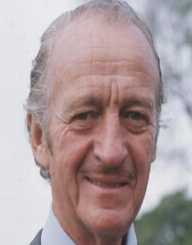 David Niven was a British actor who started in some film roles.  David Niven may be best known for his roles as the Pink Panther detective.

Even though he was active on assignment with the army, Niven was not happy.  David Niven was assigned to the Highland Light Infantry for two years in Malta and was promoted to lieutenant.  However, his lack of interest in the career and his mischief did not make him desirable in this field for much longer.

David Niven quit the army, traveled for about a year, then sought fame in Hollywood in 1934.  After some struggles gaining parts, David Niven found small roles.  One of those roles was an Able-Bodied Seaman in the 1935 film Mutiny on the Bounty.  Film producer Samuel Goldwyn noticed him and signed him on.

The 1950s were also a good decade for his career.  David Niven had the lead role in Around the World in 80 Days and Separate Tables.  The latter film was the one that earned him an Academy Award.  David Niven was also appearing or playing roles in TV series. From 1952-1956 he was on 33 episodes of Four Star Playhouse.  From 1957-1958, Niven had some roles in Alcoa Theatre.

In the 1960s, David Niven acted along other powerhouse actors of the time including Peter Sellers, Gregory Peck, and Anthony Quinn.  David Niven could be seen in films like The Guns of Navarone, The Pink Panther, and Where the Spies Are.  He also portrayed the legendary James Bond 007 in the 1967 Casino Royale. The 1970s also proved to be busy for Niven though he was well into his 60s.  David Niven had to lead and supporting roles in a variety of films such as Old Dracula, The Canterville Ghost TV movie, and Death on the Nile.

David Niven did write over the course of his life.  Out of the four books he wrote, his 1971 autobiography The Moon's a Ballon and 1981 novel Go Slowly, Come Back Quickly were more successful. His autobiography was accounts from other people's lives including co-stars Cary Grant.  The 1981 novel was based on his experiences in World War II.  His final book was incomplete due to his death.

David Niven married Primula Susan Rollo in 1940 after a two-week romance.  The couple had two sons.  She died in 1946 in a bizarre accident in which she fell down a flight of stairs into the cellar.  Niven later married Swedish fashion model Hjördis Paulina Tersmeden.  The two adopted two daughters.

David Niven died on July 29, 1983, in Château-d'Œx, Switzerland at the age of 73.  David Niven left a legacy of a British gentleman in film and television.

David Niven was diagnosed with amyotrophic lateral sclerosis (ALS), or Lou Gehrig's disease in 1981.  It ultimately led to his death two years later.