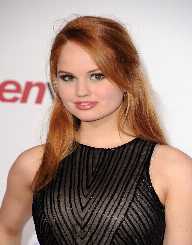 Deborah Ann Ryan was born in Huntsville, Alabama. Her father was in the US Military and stationed in Germany during her childhood. She was a pre-teen when the family returned to the United States and moved to Texas.

As a child in Germany Deborah Ann Ryan had appeared in theatrical productions, and when the family returned to the United States, she pursued her interest in acting and drama. Ryan initially appeared in television commercials before winning roles in films such as Barney: Let’s Go to the Firehouse (2007) and Longshots (2008). Her breakthrough role was that of Bailey Pickett in The Suite Life on Deck (2008-2011), a Disney Channel spin-off of The Suite Life of Zack & Cody.

Her success in the role of Bailey Pickett led to roles in Hannah Montana and The Wizards of Waverly Place. Deborah Ann Ryan also appeared Jessie Prescott in Jessie, another Disney Channel series (2011-2015).

Ryan is also a singer who has starred in the Youtube series Sing It! She made her debut on the soundtrack of Radio Rebel(2012), a Disney film. In 2012 Ryan formed a pop group, Neverending which debuted in 2014 with the single Mulholland Drive which was followed by Secondhand in 2014.