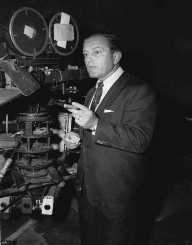 Oscar-nominated director Edward Dmytryk directed many super hit films in his forty-year-long career. Particularly known for the film noir category of movies, Dmytryk was an outstanding director whose career came to a halt when he was blacklisted as one of The Hollywood Ten for having communist sympathies.

His decision to testify before the HUAC, later, saved his career but earned him widespread criticism from the acting community throughout his life.

Edward Dmytryk was born on September 4, 1908, in Grand Folks, British Columbia, Canada. His parents Frances and Michael were migrants from Ukraine. Dmytryk’s father shuffled jobs and remarried after the death of his mother. The family moved to Los Angeles.

Edward Dmytryk went to the Hollywood High School but had a troubled childhood. When he was 14, he left home and started working as a messenger for the Famous-Lasky Studios.At the age of 31, he became a naturalized citizen of the U.S.

Edward Dmytryk made his career in the film industry progressing from a messenger to projectionist to a well-known film director and screenwriter.

Dmytryk’s first film as a director was The Hawk which was released in 1935. He then finished Million Dollar Legsbut was uncredited for the work. In 1940, he directed four movies, Emergency Squad, Golden Gloves, Mystery Sea Raider and Her first Romance. Edward Dmytryk spent the next two years with Columbia Pictures making movies in the film noir category which included Secrets of the Lone Wolf. The world was engulfed in the World War II at this time, and Dmytryk’s films were not left untouched by the theme. He made three WW II movies during this period, Behind the Rising Sun, Hitler’s Children and Back to Bataan.

The war experience had led the American Congress to investigate communist elements in the film industry, and Dmytryk came under the radar. Edward Dmytryk along with nine other people refused to testify against the HUAC and migrated to the US. Before that, he had directed the film ‘Crossfire’ which won him an Oscar nomination.

Edward Dmytryk continued to make films in England, but his visa ran out. And when he returned to the US, he was captured and imprisoned. Felt betrayed by the communists, Edward Dmytryk decided to testify before the HUAC to earn his freedom. He was also granted the permission to continue as a film director in the US. Although he continued to make successful films his reputation in the film industry had a big blot after this incident.

After retirement, Edward Dmytryk appeared in a series of interviews about cinema and the impact of the World War II on the film industry. Edward Dmytro spent his final years as a professor at the University of Southern California.

Edward Dmytryk received the Oscar nomination for the Best Director for the film Crossfire in 1948.

His picture The Caine Mutiny received was nominated for the Best Picture at the Oscars in 1955. He was also nominated for a Directors Guild Award in the same year.
He did not win any of these.

On June 1, 1999, Edward Dmytryk died from heart & kidney failure in Encino, California. He was 90 years old. He was buried at the Forest Lawn Memorial Park, Hollywood.

Edward Dmytryk married twice in his life. His first marriage to Madeline Robinson was in 1932. The marriage lasted 15 years and produced him a son, Michael.

In 1948, he married actress Jean Porter. The couple stayed married until his death in 1999. They had three children – one son Richard, and two daughters, Victoria & Rebecca.