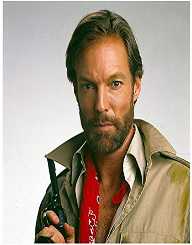 Richard Chamberlain is an American television and film actor who bust into the limelight after appearing in the television series Dr. Kildare.

Richard Chamberlain was born as George Richard Chamberlain on March 31, 1934, in the Beverly Hills area of California, USA. His father Charles was a salesperson, while the mother was a performing singer and actress. During his childhood, he had a rough relationship with his alcoholic father.

Chamberlain enrolled at the Beverly Vista Elementary School. He went to Beverly Hills High School graduating in 1952. He then joined Pomona College to study Fine Arts. He majored in painting and art history. Chamberlain became involved in drama while at the college. He received accolades for his initial performance in the play Arms and the Man.

After college, he enlisted in the US military in December 1956. He was deployed to serve in Korea for sixteen months. During his stay in Korea, Chamberlain served as a clerk in the infantry battalion. He was discharged in 1958 and returned to the US. He took acting lessons and started the Company of Angels, a theater group based in Los Angeles.

He appeared in numerous minor roles in television productions in the early stages of his career. Some of the productions included Riverboat, Gunsmoke, Mr. Lucky, The Deputy, Alfred Hitchcock Presents, Secret of the Purple Reef, Bourbon Street Beat, Whispering Smith, Rescue 8, Thriller, A Thunder of Drums, and Paradise Kid.

Chamberlain got a major role in the television production, Dr. Kildare. In the 1961 well-acclaimed series, Chamberlain played the role of medic intern Dr. Kildare. Owing to his good looking features, he became an instant celebrity figure cherished by female viewers. Keeping his military discipline, he took some dancing and singing lessons. He recorded songs like Three Stars That Will Shine.

In 1963 he tried his first cast in movies. He starred in the movie Twilight of Honor. This was a legal drama centered in a courtroom. Chamberlain took the role of an attorney David Mitchell defending a murder suspect. Two years later, he starred in a film adaptation of the book titled Joy in the Morning. In the film with the same title, he was a law student Carl Brown.

He acted in more somber roles in subsequent films to shed off the charming lovely personality he acquired during the Dr. Kildare production. Notable movies he featured in after the end of Dr. Kildare are West Side Story and The Philadelphia Story.

In 1966 he returned back to stage acting. He joined the Broadway group and featured in the 1966 stage production Breakfast at Tiffany’s. After a commercial failure with the play at Broadway, Chamberlain left the US for England.

In 1968 he featured in Portrait of a Lady, and another film titled Petulia. He continued his acting rise in 1969. Chamberlain got roles in the film The Mad Woman of Challiot. He then got another role in the William Shakespeare classic play Hamlet. He got praises from the British viewers for his roles.

He took up more demanding roles in 1970. Chamberlain starred as the Russian composer of classical music Tchaikovsky in the film The Music Lovers. Chamberlain played the role of royalty in the 1972 television film The Woman I Love. He took the role of English King Edward VIII who abdicated his throne to marry an American divorcee. He got a role in the 1973 film The Three Musketeers, the 1974 production Ladies Not Burning, and the 1977 film The Man in the Iron Mask.

In the1980s he got roles in the television series like the 1980 production Shogun, The Thorn Birds produced in 1983 and the 1985 classic King Solomon’s Mines. Chamberlain played the initial role of Jason Bourne in the television action series The Bourne Identity.

Recently he featured in Hollywood films like The Perfect Family, and We Are the Hartmans. Both films were released in 2011. Chamberlain also appeared in the 2015 film Justice League: Gods and Monsters. His latest film is the 2018 Nightmare Cinema, which he played Dr. Mirari.

Chamberlain is a self-confessed gay. He partnered with Wesley Eure in a romantic relationship during the 1970s. In 2010 he married his partner Martin Rabbett in Hawaii.