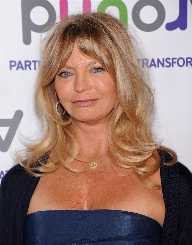 American actress Goldie Hawn was born on the 21 November 1945 in Washington, D.C. to Rut Hawn, a musician, and Laura Steinhoff, a dance teacher. She was one of three children having a sister Patti as well a brother Edward who died as a baby. Hawn is of English, German and Hungarian ancestry.

From a young age, Goldie Hawn was a dancer, beginning with ballet and tap dancing lessons when she was almost four. In her late teens, she was a dance teacher, and she also worked as a professional dancer.

Hawn had a minor role as a dancer in The One and Only, Genuine, Original Family Band in 1968. Then in 1969, she had a breakthrough role when she appeared alongside Ingrid Bergman and Walter Matthau in Cactus Flower (1969).

Over the course of her career, Goldie Hawn has won numerous nominations and awards. The first award was when she won an Oscar in 1970 for Best Actress in a Supporting Role for Cactus Flower (1969). She was nominated for Best Actress in a Leading Role Oscar in 1981 for Private Benjamin (1980). She won a 1997 Blockbuster Entertainment Award for Favourite Actress - Comedy for The First Wives Club (1996); a Golden Camera, Germany 2005 Lifetime Achievement Award, a 2003 Hollywood Film Awards Outstanding Achievement in Acting - Female Performer and a Hollywood Star on the Walk of Fame (2017).