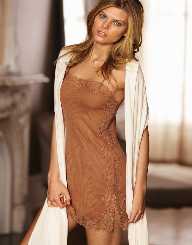 Maryna Linchuk was born 4th September 1987 in Minsk, which at the time was part of the Soviet Union. Minsk is now the capital of Belarus. She has a younger brother, Vladimir. The two children were well brought up, with strict parents who believed in their children giving their best in any situation.

Unlike many girls, Maryna Linchuk had no aspirations of becoming a model. She fell into it by accident at the age of 13, when she joined a local finishing school through a talent agent in Minsk, with one of her friends. She was quickly recognized as having huge potential in the modeling world.

In 2002, at the age of 15, Maryna Linchuk was signed by IQ Models in Moscow. IQ Models is one of the elite modeling agencies, and it wasn’t long before Linchuk was noticed by the well-known designer brands.

Maryna Linchuk was sent on assignment to Japan, where she moved to shortly after signing with IQ Models. Not too long after arriving in Japan, Linchuk did some photography shots with Paul Zotov, a world-renowned photographer. This led to modeling work over the following two years with some of the world’s leading fashion brands such as Gap, Versace, Armani, Dolce & Gabbana, and Max Mara, amongst others. She was also featured on the covers of various magazines, including Vogue and Harper’s Bazaar.

Maryna Linchuk has been the face of Escada’s Moon Sparkle fragrance, as well as the Miss Dior Cherie fragrance. In 2008 she was named one of Victoria’s Secrets Angels, a highlight of her career. She also walked the runway for Victoria’s Secrets from 2008 to 2011, and 2013.

Maryna Linchuk has continued to model for top designers including Gucci, Louis Vuitton, Michael Kors and Givenchy amongst many others. She also partnered with Rag & Bone in 2009 to create the “Maryna Jacket” – a biker’s jacket. This seems to have been her only foray into the fashion design world for the moment.

Maryna Linchuk is currently dating an investment banker but has never been married. She has decided to focus on her career for the time being. Maryna Linchuk lives in New York. Apart from her career, she is also dedicated to her brother, who also lives in the United States.