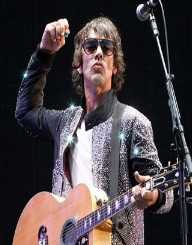 Richard Ashcroft is a renowned English singer and songwriter, more popularly known as the vocalist of hit alternative rock band from the 90's, The Verve. After the band split in 1999, he went on to become a successful solo artist with three solo albums that placed on the music charts.

Born Richard Paul Ashcroft on September 11, 1971, he is the eldest and only son of Frank, and Louise Ashcroft followed by two younger sisters. His father died of the brain hemorrhage at the age of 11 and soon after he was influenced by his step-father, a Rosicrucian practitioner, who has a penchant for performing acts that expand the mind and healing arts.

Ashcroft attended Winstanley College where he met future bandmate, Nick McCabe. Before attending Winstanley, he went to Upholland High School wherein there he also met Peter Salisbury, Simon Tong and Simon Jones who will also be a part of the band.

Before he was deeply engrossed in music, Ashcroft was an enthusiastic football player and even played for the Wigan Athletic. He gradually lost interest in the sport and turned to music instead.

The Verve was formed in 1990 alongside McCabe as the lead guitarist, Salisbury as the drummer, Jones as the bass player, and Ashcroft as lead vocalist and later joined in by guitarist and keyboardist Tong. Initially, the band was only known as Verve, but they had it altered to "The Verve" due to copyright infringement by another label. They performed their first gig being at a friend's celebration in Wigan.

The signature psychedelic melody of the band caught the attention of public and media that by 1991, Hut Records had them sign a deal and the band's studio release of "All in the Mind" has catapulted the band to fame.

The band further solidified its presence to the music industry thanks to their breakthrough album, Urban Hymns that features the band's most prominent singles "Bitter Sweet Symphony," "The Drugs Don't Work," "Sonnet," and "Lucky Man."

Disbandment of The Verve

Wildly popular and successful as they may be, The Verve also had its share of struggles both inside and outside what with the tours, press conference and other activities. Ashcroft and McCabe have continuously disputed over the band which ultimately led into its initial disbandment in 1995. Ashcroft then reformed the band without McCabe and added Tong to his lineups.

However, even Richard Ashcroft himself admitted that the band is lacking so mustered up the courage to call McCabe and asked him to return to the band once again forming The Verve. The band yet again split in 1999 and reformed in 2007 with the two finally making up but ultimately led to the Verve's final disbandment in 2009.

Before his band's formation, Ashcroft went thru the break-up of The Verve and the expiry of his contract with Hut Records. He then opted to continue as a solo artist the following year and released his first single, "A Song For Lovers" of his album "Alone With Everybody," signing a record deal with Parlophone. The album obtained platinum status with the single snagging at Top 3 in the UK Charts. He followed up with the album "Human Conditions" with the lead single "Check The Meaning." After that, he did a finite number of gigs then took a low profile on the music industry.

Although "Bitter Sweet Symphony" has been the stapled and most popular song of The Verve, even being nominated for the Grammy Award Best Rock Song, there has been legal discourse since the song was composed out of an instrumental of The Rolling Stones' "The Last Time" leading to a charge in plagiarism.

As a last-ditch effort, Mick Jagger and Keith Richards were added to the credits, and The Verve received no royalties.

He was also arrested at a Wiltshire youth center back in 2006 demanding to work there despite the presence of teenagers at that moment. His misdemeanor caused the employees to call in the police of which he was arrested and charged with disorderly conduct with a fine of £80.

In 2010 at Australia's Splendour in the Grass festival, he was yet again caught in rumors for leaving the stage after performing only one song. Afterward, a spokesperson from his management explained that the exhaustion from previous gigs days before had exhausted his voice and gave in on the said concert.

Richard Ashcroft is known to be good friends with the fellow English rock band frontman, Chris Martin, and even performed for him and with him on selected stages. Martin defined him as "the best singer in the world." Noel Gallagher and Liam Gallagher of the band Oasis are also good friends of his with Ashcroft earning the moniker of "Captain Rock" from Noel Gallagher. Ashcroft dedicated the main track of their album Northern Soul to Noel Gallagher and the latter returning the favor by dedicating "Cast No Shadow" off their album "What's The Story? Morning Glory" to him.  Aside from this, Ashcroft also served as backing vocals for Oasis' song, "All Around  The World."

However early January of 2018, Ashcroft and Noel Gallagher had a bit of spite over songwriting. Gallagher had called out artists who have "an army of songwriters" at their disposal naming Ashcroft as one of them. Ashcroft shot back at Gallagher and even his brother, Liam Gallagher, has called it a "desperate" effort to reform Oasis.

He married Kate Radley, an ex-member of the band Spiritualized in 1995 but it took a few years before it was made public. The pair has two sons, Sonny, born in 2004,  and Cassius, born in 2000. The family resides in Gloucestershire, England.