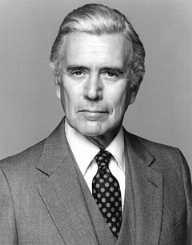 American actor John Forsythe was born John Lincoln Freund on the 29 January 1918 in Penns Grove, New Jersey. His parents were Blanche Blohm and Samuel Freund and were of European Jewish heritage. He had two siblings.

John Forsythe was a pupil at Abraham Lincoln High School, Brooklyn. After graduation, he enrolled at the University of North Carolina, Chapel Hill but left without obtaining a degree.

As a student, John Forsythe had worked as an announcer for the Brooklyn Dodgers, and when he left university, he found work doing voice acting on radio. He began his stage and film moving in the 1940s. One of his early roles was a small part in Yankee Point (1942).

In 1943 he appeared in Destination Tokyo (1943) which starred Cary Grant. During the 1940s, he also had guest roles on various television shows. He came to public attention when he replaced Henry Fonda on Broadway in Mister Roberts. In 1955, Alfred Hitchcock cast Forsythe in the movie

In 1960 Forsythe was given a star on the Hollywood Walk of Fame. He received many nominations during his career. As early as 1953 he was nominated for a Best Actor Primetime Emmy. In 1984 he won the Golden Apple Male Star of the Year award. He was nominated six times for a Golden Globe award for his performance in Dynasty and won the Best Performance by an Actor award twice, in 1982 and 1983.

The couple had two daughters and remained married until Warren’s death in 1992. He married his third wife, Nicole Carter in 2002.