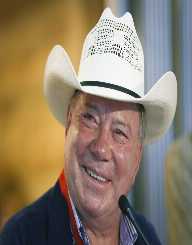 William Shatner was born on 22nd March 1931 to Joseph and Anne Shatner. Shatner’s father owned a small men’s clothing manufacturing business. His mother did part-time work in acting and gave elocution lessons. His grandparents were all immigrants to Canada, coming from various parts of Europe.

He had two sisters, Joy and Farla. One was older, the other younger, which made Shatner the middle child. Shatner’s background was lower middle class. His father worked very hard and was seldom home. When he did come home, he was always tired. Life was a struggle.

William Shatner had a stable childhood and attended two schools in Montreal – Willingdon Elementary School, and then he went on to Westhill High School.

After high school, although William Shatner had the opportunity of acting, he chose to go to university. He attended McGill University, also in Montreal, and went on to graduate with a degree in Commerce in 1952. Because of his poor background, Shatner paid for his education. That is having been said, he lived at home until he was 21 while putting himself through university.

William Shatner has a varied career. He is not only an actor in movies and television series, but he is a prolific author and musician. He also directed one of the later Star Trek movies. As a musician, he has released several albums. William Shatner normally speaks the lyrics which is quite different from normal works. His albums include “The Transformed Man” (1968), “William Shatner Live” (1977), and “Has Been” (2004) amongst others.

Shatner’s first movie was “The Butler’s Night Off” in 1951, and his first television show began in 1954 with a role in “The Canadian Howdy Doody Show.” Throughout his illustrious career, William Shatner has been in over 20 movies, and over 30 television shows, proving his popularity and charm has been a winner with audiences the world over. With his writing, William Shatner has penned both fiction and non-fiction. He completed eight works of non-fiction, including his autobiography that was written with David Fisher in 2008. It was titled, “Up Till Now: The Autobiography.” There were over 27 releases of fiction works. This included nine books in his TekWar series and ten Star Trek books written in conjunction with Judith and Garfield Reeves-Stevens. His war series had two books, and his Quest for Tomorrow series had five books.

William Shatner did find it hard to get work once Star Trek finished airing, because he had been type-cast in the role of Captain Kirk and it was felt would not be very believable in other roles. He was very humbled during this period, taking whatever work he could get to help his family. He got through but hasn’t forgotten the hard times. This, perhaps, contributes to him being so down-to-earth now.

Shatner’s lifelong break came when he was cast as Captain James T. Kirk of the U.S.S. Enterprise, in the television series Star Trek. (The ‘T’ stands for Tiberius). Even though Star Trek only had three seasons on television, it because a cult classic throughout the 70s and even now, 50 years later, it is as popular as it ever was. It has spawned several more series under the Star Trek banner such as Star Trek: The Next Generation. Due to the popularity, Star Trek movies were also made, and William Shatner starred in them as well.

In 2017 Star Trek will celebrate its 50th anniversary. William Shatner will host a cruise to celebrate the occasion. William Shatner also had two television series that became instantly popular. The first was T.J. Hooker in which he played a police officer. This ran from 1982 to 1986. The second show was Boston Legal, which William Shatner starred in with Candice Bergen. The show was on television for four years, from 2004 to 2008 and Shatner played the part of a senior attorney.

In 2014, William Shatner was honored by NASA and received the NASA Distinguished Public Service Medal. This is the highest award granted by NASA to non-government employees.

In 2011, William Shatner received two awards. An Honorary Doctorate of Letters from McGill University, and the Governor General’s Performing Arts Award. There have been many other awards through his career, including two Emmy Awards, two Saturn Awards, and two Golden Globe Awards.

Over his lifetime, William Shatner has had four marriages. His first wife was Gloria Rand. They were married in 1956, and there were three daughters from this marriage. Leslie, Lisabeth, and Melanie who are now all in their 50s. After the divorce of his first marriage, William Shatner married again in 1973 to Marcy Lafferty. This marriage also broke down, with the pair divorcing in 1996.

Shatner’s third marriage was to Nerine Kidd in 1997. The marriage took a tragic turn when Kidd died in 1999 from drowning. She was an alcoholic, an addiction not spoken much about at the time. Shatner was devastated over her death.

In 2001 he married for the fourth time, to Elizabeth Martin and the two are still happily married. As well as his three daughters, William Shatner has five grandchildren who he loves spending time with. He’s a family man, and sees his daughters every weekend, always doing something with them.

William Shatnerr is also very down-to-earth and is constantly having the conversation of how to manage money with the young family members. He thinks it is a good thing not to give too much money, that way they stay hungry towards their dreams, but on the other hand, it isn’t good to keep all one’s money and have the young family members struggle. It’s nice to know someone with as much fame, and fortune as Shatner keeps it real with his family.

William Shatner is a keen horseman. He has a farm in Kentucky where he breeds horses, and rides and shows his horses regularly. He feels that now, in his 80s, he is riding better than ever!

One person that William Shatner was very close to was Leonard Nimoy, one of his co-stars in Star Trek. Shatner and Nimoy were the best of friends for many, many years until Nimoy passed away in 2015. Shatner misses him dearly and understands that life is very precious and we only have the moment we are living in now. Shatner lives in the present moment and appreciates life.

He also plays on the “World Poker Tour” with other celebrities, who play for their favorite charities. William Shatner raises money for children’s charities through the Hollywood Charity Horse Show.

A down-to-earth man, William Shatner will forever be remembered for his role as Captain Kirk in Star Trek. He has a star on both the Hollywood Walk of Fame and the Canadian Walk of Fame.

A man who loves his family and cherishes every moment of life, as well as doing charitable works. He will be well remembered in times to come.