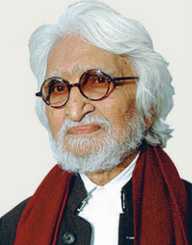 Known as the Picasso of India, M. F. Husain was a painting genius with a highly public and controversial career. He was extraordinarily gifted and an accomplished artist of the 20th century India. His talents were not limited to painting only, and he was recognised for printing, photography, and film-making as well. The most remarkable fact about Husain is that he was mainly a self-taught artist.

M. F. Husain's paintings have had several prominent Indian political figures of the pre-independence period as their subjects and also the famous epics, Ramayana and Mahabharata. His paintings of Hindu deities sparked a lot of controversies when religious groups claimed that they hurt the sentiments of people. He was also accused of showing disrespect when he painted India as a nude woman in a painting.

M. F. Husain was also a founding father of the Progressive Artists Group in Mumbai(Bombay).

M.F. Husain’s full name is Maqbool Fida Husain. He was born on September 17, 1915. His star sign was Virgo. His birthplace is Pandharpur, Maharashtra. His parents were Zunaib and Fida Husain. Maqbool’s mother died when he was quite young, and he felt this pain throughout his life as he often commented in his interviews later.

The painting was a way for young Husain to escape the loneliness he felt at his home, and he began drawing at the young age of seven. He learned calligraphy and Kulfic khat and started his career as a poster designer.

Like many artists, M. F. Husain came to Mumbai with big dreams. And like many of them, he struggled to make ends meet, much less realize his dreams. Finally, with very little hope of making any progress, he started to work as a billboard painter to earn enough to feed himself. He also found a job building toys for a toy design company.

It took Husain nearly 12 years, from 1935 to 1947, of struggle to get recognized for his talent. This was the same year in which India became independent. He made the political turmoil of the country his theme, and many of his paintings became very popular. That same year he became a founding member of The Progressive Artist's Group in Bombay. Some famous subjects of his paintings were Mahatma Gandhi, Mother Teresa, and Hindu Gods & Goddesses.

M. F. Husain held his first solo exhibition in Zurich after 1950. In this period he also came in contact with established artists such as Picasso.
In 1967, Husain’s first film titled Through the Eyes of a Painter was released.

As Husain’s fame grew, his works were surrounded by controversies. Radical Hindu organizations claimed that his works hurt the religious sentiments of the Hindus and started rallies for banning his work. They also attacked his house and tried to destroy his paintings.

M. F. Husain was opposed not only by the radical Hindu organizations, however. He also managed to enrage Muslim communities with his film Meenaxi – A tale of three cities. His portrayal of India as a nude woman in the painting Bharat Mata sparked further controversy.

After facing numerous death threats and lawsuits that disturbed his peace of mind, M. F. Husain decided to leave India in 2006. He moved to London and also lived in Dubai for a period. In 2010, he became a citizen of Qatar.

M.F. Husain was an extremely talented and an accomplished artist. He received the 1967 National Film Award for Best Experimental Film titled - ‘Through The Eyes of a Painter.’

M. F. Husain was married to a woman named Fazila Bibi. They were married in 1941 and had six children. Even though Husain was attracted to other women after marrying Fazila, she remained incredibly loyal and supportive towards him.

Husain once proposed to marry a young woman named Maria, but she declined. Husain was also attracted to the famous Indian actress Madhuri Dixit. He spent his later years in London and Dubai and became a citizen of Qatar in 2010.