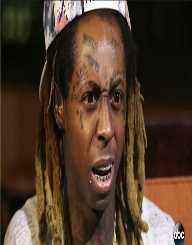 Lil Wayne is an American rapper who is famous for having more entries on the Billboard Hot 100 than any other artist.

Lil Wayne was born as Dwayne Michael Carter in New Orleans, Louisiana on 27 September 1982. His parents divorced when he was two, and his father was not part of his life. His stepfather was also murdered while Lil Wayne was still young. His mother worked as a cook and had Lil Wayne when she was just nineteen years old.

Lil Wayne was a bright child and was enrolled in the gifted program at his elementary school. He also attended Eleanor McMain Secondary School and Marion Abrahamson Senior High School. Lil Wayne was involved in drama at school.

Lil Wayne played the Tin Man in a high school production. When he was twelve, he accidentally shot himself in the chest. Despite being an honors student, Lil Wayne dropped out of school to focus on music. He also dealt crack and was a frequent user.

Lil Wayne wrote his first rap at the age of eight. He met Bryan ‘Birdman’ Williams in 1991. Williams was a rapper and with his brother, Ronald ‘Slim’ Williams, owned Cash Money Records. Williams took the young Lil Wayne under his wing and allowed him to appear in Cash Money-distributed records.

At age eleven, Lil Wayne began collaborating with Christopher ‘Baby Gangsta’ Dorsey (BG). They released the album True Story in 1994 as B.G.’z. Following the album’s release B.G.’z combined with rappers Turk and Juvenile to form the Hot Boys. Their debut album Get It HowU Live! was released in 1997 and sold 300,000 copies. The members would also appear on the solo albums of each other.

In 1999, they released Guerrilla Warfare. The album reached number five on the Billboard charts and number one in the R&B/Hip-Hop album charts. The record sold one and a half million copies. Let ‘Em Burn was released in 2003. By the time of its release, all members of The Hot Boys had left Cash Money Records, bar, Lil Wayne. It reached the top twenty on the Billboard charts.

Lil Wayne’s first solo album, Tha Block Is Hot, was released in 1999. It featured the other members of The Hot Boys. It is also marked by a lack of profanity from Lil Wayne as his mother did not want him cursing. The album is certified platinum and reached number three on the Billboard charts.

His second album, Lights Out, was released in 2000. It was not as well received but did reach the top twenty in America. A third album, 500 Degreez, also failed to enjoy the success of his debut album.

Lil Wayne followed Tha Carter up with Tha Carter II, and the album achieved platinum status. Lil Wayne then worked on a series of collaborations with other artists. He also released some mixed tapes and singles. He worked with Birdman, Chris Brown, Akon and others during the three-year gap between Tha Carter II and Tha Carter III.

Tha Carter III sold a million copies in its debut week. It also featured the single Lollipop which topped the Billboard charts, giving Lil Wayne his first number one. The album was also the biggest selling album of 2008.

2009 saw Lil Wayne release a collaboration album with Young Money. The album We Are Young Money, featured the single hit Bedrock. Rebirth was Lil Wayne’s sixth solo album, and it was released in 2010. It was poorly received by critics , but charted at number two and featured the single Drop the World, which featured Eminem and went four times platinum.

Tha Carter V has repeatedly been slated for release but has been delayed each time. This led to Lil Wayne suing Birdman and Cash Money for the delays. He also released Free Weezy Album as a protest. Due to his disputes with Cash Money, it is felt that Lil Wayne will not record another album.

Lil Wayne released a book of his memoirs from his time in prison titled, Till November. He is a keen sports fan, supporting the Green Bay Packers, Boston Bruins, and Boston Red Sox, and has worked with ESPN. He writes for the network and has repeatedly appeared on the show First Take. Lil Wayne took online classes in psychology with the University of Houston and the University of Phoenix.

Lil Wayne has four children. He married Antonia Carter in 2004. They had a daughter, Reginae, together before their marriage. The couple divorced in 2006. In 2008, Lil Wayne had a son, Dwayne, with Sarah Vivian. He had a third child, Cameron, with Lauren London, an actress from Entourage and 90210. He fathered a fourth child, Neal, with the singer Nivea in 2009.

Lil Wayne is currently dating singer Christiana Milian. Lil Wayne has suffered a series of high profile seizures. In 2013, he was hospitalized, and it was rumored he was on his deathbed. The cause of the seizures has never been revealed, but it has been claimed it is linked to his codeine abuse or a failure to properly care for epilepsy.

He was sentenced to 36 months of probation in 2010 for his repeated drug-related arrests. Lil Wayne has been using drugs since the age of eleven. He is also rumored to be addicted to codeine and has been criticized for his use of purple drank.

Lil Wayne is a Roman Catholic and has repeatedly and publicly declared his faith in God and Jesus Christ.