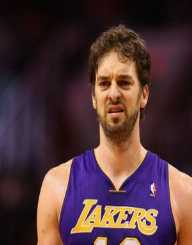 Professional basketball player Pau Gasol was born on the 6 July 1980 in Barcelona to Agusti and Marisa Saez. He is the eldest of three boys, and his younger brothers are Adria and Marc. His father Agusti is a hospital administrator, and his mother is a medical doctor. Gasol came from a sporting family, and his father played second-division basketball. As a boy, Pau Gasol was inspired by the Dream Team and remembers watching them win Olympic gold at the 1992 Barcelona Olympics.

Pau Gasol attended medical school in Barcelona but left to pursue a career as a professional basketball player before graduating.

During the first round of the 2001 NBA Draft by the Atlanta Hawks, Gasol was drafted third overall. During his first season, Gasol was named NBA Rookie of the Year, the first European to have achieved the honor. He had a good year and won in areas such as field goal percentage, scoring, and rebounds.

He was selected to play in the NBA All-Star Game in 2006 for the Western Conference as a reserve center. His selection was historic as he was the first Grizzlies to be included in the All-Star Game and the first Spanish player to do so.

Pau Gasol played for the NBA’s Memphis Grizzlies for seven seasons and was then traded to the Los Angeles Lakers. Gasol played for the LA Lakers from 2008 until 2014. He then joined the Chicago Bulls for two years (2014-2016) and then went to the San Antonio Spurs whom he signed with in July 2016.