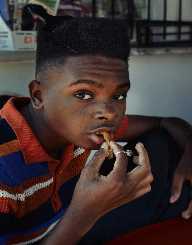 Jay Versace was born on January 24, 1998, in Pleasantville, New Jersey, United States of America. He is an American Vine star and a social media personality. He is nineteen years old, and he is known by the nickname Jay. He started his career by posting videos on Vine and YouTube. His videos were based on random topics that he chose to talk about. His videos are comical and humorous yet educative. He also collaborates with other Vine stars to make videos. He adopted his name ‘Jay Versace’ from a video that he downloaded of rapper Riff Raff feeding his dog ‘Versace Water.’ He found the video so funny that he adopted the name, Versace. His most viewed video is titled ‘I Got Kicked Out of School.’

Jay Versace started his career when he opened a Vine account. He began uploading videos on the Vine because he loves to make people laugh. He was raised in Pleasantville, New Jersey, the United States where he also started his career as a Vine star. He began by recording six second long funny videos which he would post on Vine. He would take funny videos of his friends, family, and entertainers who were involving themselves in entertaining activities. He uploads videos every day but not with the same approach but different approaches that would seem more interesting to his viewers.

Jay Versace has the ability of impersonation, and he impersonates anyone from his mother to friends to different entertainers and then converts the imitation into a joke. He is talented in making people laugh as he is a funny character. His aim by uploading sunny videos is to ensure that he makes people’s days by his hilarious videos. He is so amusing that he uses facial expressions, wigs, and so many other props to make laugh at the jokes that he makes. People laugh at his jokes no matter who he is impersonating.

At times entertainers whom  Jay Versace has impersonated and made jokes about would tweet him back and tell him how they enjoyed the video that he made about them. He receives a lot of support from his family, and they encourage him to make jokes about them and post them online. Jay can make everything seem funny even the most serious of events.

Jay Versace has accomplished popularity and success as a teenager that many other teenagers have not been able to. His ambition since he was young was to become an actor and a comedian. He makes everything around him look funny. It is like he was born with the ability to be funny all the time. His mother has been his inspiration in making funny videos. He would make funny videos of his interaction with her on a daily basis, and the post them on the internet via Vine. Jay Versace is however not his real name, and his real name is not known to the public.

Jay Versace was brought up by his mother and his stepfather who died in 2014. He was a very funny student in school, and he would make all his fellow students and teachers laugh at his jokes. His mother has been his inspiration since he started making funny videos. He had impersonated his mother and  many other people in his videos. He has an estimated net worth of $700, 000. He has more than three million followers on Vine, over two hundred thousand subscribers on YouTube, more than five hundred and fifty thousand followers on Instagram and over more than one hundred thousand followers on Twitter.