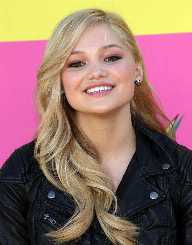 Olivia Hastings Holt was born 5th August 1997 to Mark and Kim Holt. She is one of three children, with a sister named Morgan and a brother named Cade.

Although Holt was born in Tennessee, at the young age of three, her parents moved the family to Mississippi. She attended DeSoto Central Middle School in Mississippi. Holt also began going to gymnastics classes which lasted several years, and would later make her stand in good stead.

Holt’s family moved to Los Angeles in 2011, and Holt went to Oak Park High School in California. She graduated in 2015.

Olivia Holt began at an early age to do television commercials and was cast in local productions, where she got her grounding for acting and singing.

Her big break came in 2011, when Disney cast Holt in the role of “Kim” in their martial arts comedy series, “Kickin It.” Holt’s gymnastic ability played a large part in her getting the role. Her character, Kim, was the instant hit of the show and she starred in it for three seasons, with several guest roles in the fourth season.

Whilst is doing “Kickin’ It,” in 2012, Disney cast Holt in their movie, “Girl vs. Monster”. In 2014, Disney cast Holt as one of the lead characters in a comedy series they created called, “I Didn’t Do It.” The series ran for two seasons.

Holt has now been cast in one of the lead roles of an upcoming Marvel Comics television series, but at the time of writing, Holt has only been cast. The show has not yet been made.

Olivia Holt has been extremely busy with her filming as well. Apart from all the television work she has accomplished, she has also starred in three movies, all due for release in 2017. They are “Same Kind of Different as Me,” “Class Rank” and “Status Update.”

Holt is still signed with Ford Models. She has an advice column in the teen magazine, Tiger Beat, and has her radio show on Disney radio each week. Holt is a very busy young woman.

As if all her acting wasn’t enough, Olivia Holt is also an accomplished singer. Her debut self-titled EP was released in 2016 on the Hollywood record label. She has also published several singles, mostly for Disney, performed for different productions. She went on tour in 2016 as well, with several other young entertainers.

Although Olivia Holt is not yet 20, she has been in the acting and music industry for over ten years and seems to be just getting started. She has been extremely busy with her filming and music, as well as with her writing and radio.

Olivia Holt appears to be very level-headed, and she is very thankful to her parents and siblings for their support. It will be interesting to watch Holt’s star continue to rise.