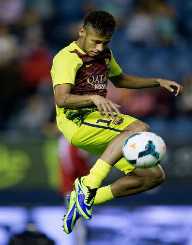 Neymar was born on February 5, 1992. He is a Brazilian professional football player. He plays for FC Barcelona in the Spanish League and the Brazil national team. He started playing football at a young age. His football career began when he was 17. Neymar’s father was a footballer, and he nurtured Neymar into a professional. He joined the FC Santos when he was eleven years old. Neymar helped the Brazilian football team reach the semi finals in the World Cup which was held in Brazil in 2014. Neymar is one of the leading footballers in the world.

Neymar Da Silva Santos Junior was born on February 5, 1992, in Mogi das Cruzes, Sao Paulo, Brazil. He was born to Neymar Santos Senior who was a professional footballer and Nadine Da Silva. His father was his mentor and trainer when it came to football. Neymar played a lot of street football and he was known for his skills in the game.

In 2003, Neymar and his family moved to Sao Vicente. There he began playing for youth side Portuguesa Santista. Later in 2003, Neymar joined the Brazilian club FC Santos when he was eleven years old. His skills in football grew s time went by and he became a good footballer. At 17 he signed a contract with FC Santos.

In 2009, Neymar led FC Santos to victory playing as a goal scorer. The team won the Libertadores Cup, and this was when Neymar debuted as a senior in the group. The victory earned him the League’s Best Young Player Award. In his stay with FC Santos, he had scored 54 goals out of 103 appearances. At this time Neymar was being courted by the most prominent teams in Europe. When Neymar was only 14, he was accepted by the Real Madrid Academy, but he stayed back in Brazil as FC Santos had offered him a lot of money.

In 2010, Neymar scored five goals for Santos in the qualifying stages of the Brazilian Cup. In the same year, the team was crowned winners in the Campeonato Paulista competitions. Neymar was honored with the award for the best player of in the game. In the same year, Neymar rejected offers from English Premier League team West Ham United and the English Club, Chelsea. He refused them because he wanted to continue playing for FC Santos.

In 2011, he scored 3 goals in the Olympics to win a silver medal for Brazil. Neymar signed with FC Barcelona in 2013 for a transfer fee of $76 million. In the same year, he played for his national team, Brazil, scoring 4 goals that would make the Brazil team champions in the Confederations tournament.

Neymar started playing for Barcelona in the 2013 season. He made quite a good impression so that many people loved him for his skills. He scored goals for Barcelona in many important games. In the 2014 season, he scored 39 goals in all competitions for Barcelona. The club went on to win the League Cup. In the 2014 FIFA World Cup, Neymar played for his national team (Brazil) where he scored four times in the tournament but got an injury during the quarterfinals. He did not play in the semifinals, and so Brazil lost to Germany.

In 2011, Neymar won two awards, ‘The Young Player of the Year’ award and the ‘FIFA Puskas Award’ for scoring the best goal of the year. Neymar’s greatest achievement was scoring 39 goals for FC Barcelona in the 2014 season.

In 2011, Neymar had a son, David Lucca, with Carolina Dantas. He was criticized for having a child out of wedlock. He is not married and not much is known of his personal life.