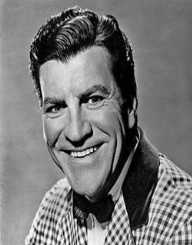 Robert Preston Meservey was an American stage and film actor. He won the Golden Globe Award and 55th Academy Awards.

Born as Robert Preston Meservey to the couple Ruth L (nee Rea) and Frank Wesley Meservey. He was born on June 8, 1918, in Newton, Massachusetts, USA. His father, Frank Wesley was a garment worker and billing clerk.

Robert Preston enrolled in the United States Army Air Forces during WWII to serve as an intelligence officer and rose to the position of a Captain. He worked in Belgium. He was involved in getting intelligence report from HQ and report to the bomb squad. He served the military during 1942-1945.

Robert dropped his family name, Meservey when he started featuring in films. He starred in many Hollywood Western films. He featured in Beau Geste (1939), North West Mounted Police (1940) and This Gun for Hire (1942).

Robert Preston and Catherine Craig got married in 1940.

Robert Preston suffered from lung cancer and died on March 21, 1987, at the age of 68 leaving behind his wife, Catherine, and father, Frank.