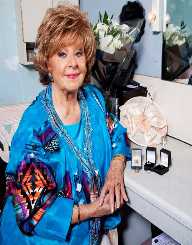 Barbara Knox is a native of Lancashire, who was born in Oldham, England.  At birth on September 30th, 1933, she was christened Barbara Brothwood.  When she was aged 15, she had to drop out of school and took up a job at the Post Office. Barbaara also worked other odd jobs at the factory, shops, and disparate offices. She was exposed to the theatre at this stage as an amateur, and this led to her starring in the stage performance titled “The Boyfriend.”

Barbara Knox was seen in the 1960s as one actress who found herself in the midst of other well-known names like Violet Carson, Pat Phoenix, and Doris Speed. Having garnered the basic experience with the platform available at Oldham, Barbara fit in the mold of others like Malcolm Hebden, Anne Kirkbride, and Kevin Webster.

As Barbara found her feet in the acting scene, she was starred in Ward 10, The Dragon, “Never Mind the Quality” as well as Feel the Width. She also appeared on shows like George and the Dragon as well A Family at War. Knox's first role on the set of Coronation Street was in December 1964. It was just an episode only, and she was cast as a friend of Dennis Tanner. Dennis was a character played by Philip Lowrie.

By the year 1972, which was eight years down the line, Barbara Knox took on the character of Rita Bates. In this role, she was the partner of Harry Bates, and it was a display she fit into so well. She also got married to Ted Sullivan and Leo Fairclough over the time of her role on the set of Coronation Street.

Barbara Knox has always shown latitude for high drama on the set which correlates with the way she related to her colleagues. This is not to forget having foster children on set like Jenny Bradley. Knox's professional acts pitched her as a viewer’s delight. Reference is always made to the season that screened in 1984 which led to the demise of Alan, who was on the trail of Rita. The recollections made by Barbara on set were a memorable one to honor Alan.
Barbara Knox always took on an animated note on screen for the character she had to portray. She showed an élan of enthusiasm that was infectious and worthy of note.

Barbara aged gracefully through the decades on the set of Coronation Street and when she turned 80 in 2013, it was near unbelievable that she was that old. Her pals and coterie were at behest when she celebrated at the Granada Studios.

When pressed for the secrets of the youthfulness she exuded even after eight decades on earth, she enthused that a healthy life was the pathway. When Barbbara had to leave the set of Coronation Street, it was with mixed feelings, but she had put in the time, and it was a phase that was ending in her life. Many people wonder if there would have been a Barbara Knox of this acclaim if there was no Coronation Street, but fate had a hand in how it all played out.

There is no doubt that Coronation Street was the hallmark of Barbara Knox‘s life and experience as an actress. She was playing her role with all the controversies that came along. The theme of child exploitation was one that was examined on the set of the show and seeing that horrific end was a telling one for the cast and audience. In reality, numerous children are exposed to the short end of the stick that life can offer in this manner.

The telling episode was one that a 30-something years-old man groomed a teenager for exploitation. While some saw the display as a graphic one, the writers of the script saw it as a duty to highlight this ugly side of life. Many viewers were able to relate to the display by Barbara and her colleagues when Coronation Street courted controversy. One thing that stands out is that the early signs can be seen and learned by parents, guardians and teenagers alike.

Grooming always seems harmless at the initial stage but seeing it is still a prelude to the abuser baring its fangs, it is worthwhile that its ills get unveiled. It was indeed a tribute to the Granada Studios family when they came up with such touchy but gripping hard-truths about such a blind side of today’s society.

Barbara Knox was named the 1989 TV Times Best Actress of the Year as well as the Best Actress by Oracle Teletext Best. These were in respect of her portrayal for the storyline about Alan Bradley. Knox was also honored in the year 2004 when she bagged the Lifetime Achievement Award in respect of TV Soap portrayals.

She dilly-dallied about her real age until the year 1993 when a tabloid exposes by UK Sun led to her admitting her exact date of birth. Until that time, she hid behind the façade that she was five years younger.

Barbara Knox got married in 1954 to Denis Mullaney, and they had a child. The pair broke up in 1957, and she entered a union with John Knox.  They had a son who was named after her partner. By 1994, Barbara broke up with her spouse but kept the marital name. She also had an older daughter who was fathered by another man she earlier dated.