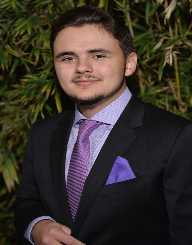 Michael Joseph “Prince” Jackson Jr. is the eldest child of the late pop legend “king of pop” Michael Jackson. Born on February 13, 1997, he has appeared on several television shows and served as a correspondent on Entertainment Tonight. In addition, he is involved with the charity organization, Heal Los Angeles. The organization aims at fighting social plagues including child abuse, homelessness, and hunger. Michael Jr. came to the limelight after the death of his father in 2009.

Michael Joseph Prince Jackson Jr. was born on February 13, 1997, Beverly Hills, Los Angeles. California. He is the first of three children of late pop singer, Michael Jackson and his wife, Debbie Rowe. Following the divorce of his parents in 1999, Debbie signed the custody of Michael Jr. and his sister Paris Michael Katherine to Michael Jackson. His youngest sibling is Prince Michael "Blanket" Jackson. Michael Jr. received education from the Buckley School, where he graduated in 2015. Following that, he made a stint into show biz.

Speculations on his biological father

There is no doubt about Michael Jr.’s biological mother; however, people have raised questions about biological father. In a 2017 interview with Rolling Stone, Michael Jr. expressed his disgust towards such speculations. Also, he questioned the motive of the people sought to delve into such issues. He said, "Every time someone asks me that, I ask, 'What's the point? What difference does it make?' “How does that affect your life? It doesn't change mine."

Michael Jr. was 12 years when his father died of cardiac arrest on June 25, 2009, at his Los Angeles home. As a result, Michael Jr. and his siblings came under the legal guardianship of their grandmother, Katherine Jackson. Following their father’s death, the sibling hardly appeared in public.

Michael Jr. made an entry into the entertainment and media industry in 2013. He started as a guest correspondent for the entertainment news program Entertainment Tonight. Subsequently, he interviewed the likes of director Sam Raimi, Zach Braff and James Franco on their film Oz the Great and Powerful.

Gaining strong interest in the entertainment industry, Michael Jr. in an interview with Entertainment Tonight expressed his desire to become an all-rounded entertainer. In addition to his natural love for music, he desires to become an actor, screenwriter, director, and producer.

Michael Jr. is an avid traveler and a motorcycle enthusiast. Also, he is a lover of dogs. Unlike his father, he is not good at dancing. On Today show, he said, he could not dance like his father, adding, “I didn’t get that gene.”