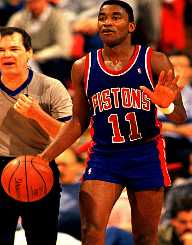 Isiah Thomas stood confidently with his 6-feet tall body. Not to applause himself for good work but to eagerly remain at his best position. During his teenage life, he was known as a high-spirited competitor who gave no quarter and waited for none whatsoever. Just like his legendary playmate; Johnson, Isiah came with a powerful skill that allowed him to take over the game of basketball. He was once nick-named as ‘baby-faced assassin’ mainly because as his sunny smile laughed at you; unknowingly he cuts you down under one-quarter run.

On April 30, 1961, Isiah Thomas was born in Chicago, Illinois. He was the youngest child of nine siblings. Thomas went to St. Josephs High School. Isiah used to walk one and a half hours to commute to and fro. He continued his studies till he joined the State final.

Later on, he was recruited by Indian University to play for their Indian Hoosiers team. His brother and his friends tried to discourage Thomas to neglect the given offer. But he turned a deaf ear to every suggestion that came his way. Standing still like a flagpole, Thomas accepted the offer like a cup of tea in the morning.

Later on, Thomas joined up with his father, James in an International Harvester firm. He was employed as the first African American supervisor. Unfortunately, the business closed down, and he moved away from his family. His mother Mary Thomas struggled to bring a daily bread for her ten children. Thomas once recalled his life as a street boy trolling with an empty stomach. He went out of the box and worked as a shoe-shiner.

As he continued to grow up, Isiah Thomas used to visit the West Side pocket park where he played basketball. His brother, Lord Henry became a remarkable superstar in the neighborhood. Isiah learned one thing or two from his brother. According to him, he used to play often just to forget that he needed to eat something for dinner or lunch.

It was as if the courtyard became a stumbling block to out his violence and hunger. As time passed, he came to realize that his basketball skill was up to the mark. He once sat down and thought how his talent would eradicate poverty in his family. He hated the way his mother struggled day and night without hope.

Thomas’ family waited for that epic day that one of her boys probably would come to join the NBA team. His brother Larry was once invited for an interview, but he experienced an injury that caused him to stay at home. He then started doing drugs.

Now, it was up to Thomas to think the way forward. Luckily in 1981, Thomas prayers were answered where he was selected in the second runners-up in the NBA draft. At the age of 19, he took the responsibility of securing his team as it was known as the weakest. Time passed, and he was nicknamed as ‘Isiah the Savior.' At the NBA Finals, Thomas was lucky to sign $1.6 million contracts. Undaunted by the results, Isiah, lead his team with much zeal and effort. He even improved more in his second final, averaging nearly 23 points and eight assists per game basis. Both years Thomas represented the team ambiguously.

Isiah Thomas earned the Naismith Memorial Basketball Hall of Fame in 2000.From 1980 to 1990; he garnered the NBA Champion title as well as an All-NBA Second Team. From 1982 to 1993 Thomas received more than one NBA All-Stars title. In 1987 he earned J Walter Citizenship Award. The most notable accolade was that of the 50 greatest players in NBA history in 1996.

In 1991 The Chicago Bulls scored higher, and Jordan as the leader took the title away from the Pistons (Thomas team).Thomas had a strained foot and an injured wrist that made him slow down while he was playing. Pistons were later defeated in the final and Bulls took the leading step. Several physical problems lingered ‘The Savior’ to save the Piston team.

By the end of 1993 to 1994, it showed that Thomas had little strength to support himself entirely. In that regard, he turned 32 which meant that he was near to end his basketball role. During his last season, he had a hyperextended knee, strained arch, a cut on the left hand and broken rib. He played his last game against Orlando where he tore a part of his Achilles tendon. He didn’t have an option than to end his long-term career.

According to sources, Isiah Thomas retired with 18,822 points 1,861 steals over the 979 games of all the Piston records. Not to mention he scored 9,061 assists. His amicable results earned him an All-Time Team of NBA’S 50th Anniversary. In his later life, Isiah became the president of the NBA Players Association after his fruitful basketball records and analysis

Isiah Thomas also continued with his charitable work and helped to eradicate poverty, crime and brought more educational to the needy. When he was still playing, Thomas had already paid tuition for over 80 teenagers. According to him, Basketball didn’t mean everything but how he is remembered after his retirement directly played a considerable role.