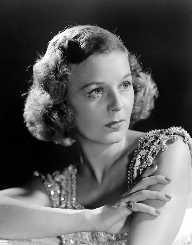 American actress Margaret Brooke Sullavan was born on the 16 May 1909 in Norfolk, Virginia into a prosperous middle-class home. Her parents were Cornelius and Garland Sullavan.

Margaret Sullavanwas educated at the Chatham Episcopal Institute, and in 1927 she was the student president. After high school, she began drama studies in Boston.

Margaret Sullavan’s debut role in her acting career was in 1929 when she had a part in a Harvard Dramatic Society production of Close Up. Following her performance, she joined the University Players on Cape Cod for the summer of 1929. It was around this time that she met Henry Fonda when they appeared alongside each other in The Devil in the Cheese. Later in 1929, Margaret Sullavan joined a touring company, and in 1931 she made her debut on Broadway in A Modern Virgin. She spent the following two years working on Broadway, and in 1933 she signed a three-year contract with Universal Pictures and moved to Hollywood.

After moving to Hollywood, her first film was Only Yesterday. Little Man, What Now followed this film? (1934), The Good Fairy (1935), The Shop Around the Corner, The Mortal Storm and Next Time We Love. Three Comrades, Back Street and Cry Havoc. Margaret Sullavan continued making films until the 1940s when she returned to stage work. Her last film was No Sad Songs for Me (1950) which was well received.

After retiring from film in the late 1940s, Margaret Sullavan continued with her stage career throughout the 1950s. She appeared in The Voice of the Turtle on Broadway as well as The Deep Blue Sea (1953), Janus. (1955-1956) and others.

From middle-age onwards, Margaret Sullavan suffered hearing problems. She also suffered from depression. In 1955 she had a nervous breakdown.

Margaret Sullavan’s first husband was the actor Henry Fonda whom she met when they were both aspiring young actors. They married in 1931 and divorced in 1933. She then married William Wyler in 1934, and that marriage ended in divorce in 1937. Her third husband was Leland Hayward (m.1936-div.1949). The couple had three children: Bill, Brooke, and Bridget. Sullavan then married Kenneth Wagg in 1950, and they remained married until she died in 1960.

Margaret Sullavan died on the 1 January 1960 from an accidental drug overdose.