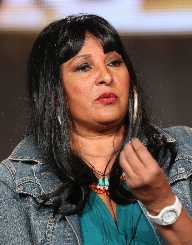 Pam Grier was born on May 26th, in 1949. She is a celebrated American Actress more so for notable films such as The Big Bird Cage – 1972, Foxy Brown – 1974, and Sheba, Baby – 1975. In these films, she starred depicting the line of women in prison films at the time. Nevertheless, Grier received numerous critics due to her inclination on blaxploitation type of films.

Pam Grier was born Pamela Suzette Grier on May 26th, in 1949. Her place of birth was in Winston-Salem in North Carolina. She is the daughter of Clarence Ransom Grier and Gwendolyn Sylvia. Her mother worked as a homemaker whereas her father was a mechanic. Also, her father was in the Air Force as a technical sergeant. As a result of her father’s flexible career, Grier moved a lot during her tender years before finally settling down in Denver, Colorado.

In 1967, Pam Grier shifted places again this time moving to Los Angeles. She landed on her first job here with American International Pictures. Rumor has it that Grier’s acting talent was discovered by Jack Hill, a film director. Hill was the director that gave her parts in women in prison films such as The Big Doll House – 1971, and a year later in The Big Bird Cage. She also played roles in blaxploitation movies during the 1970s. She featured in Coffy in 1973.

Unfortunately, blaxploitation films quickly disappeared at the end of the 1970s, and therefore Grier had to move on to other film roles. After that, she managed to land on smaller film roles throughout her film career. Some of the films that she featured in include Fort Apache, The Bronx – 1981 and Above the Law – 1988.

Aside from the film industry, Pam Grier also landed on many roles on TV including Miami Vice, Crime Story, Frank's Place, Monsters, Pinky and the Brain among others.

In her personal life, Pam Grier has never wedded anyone. Nonetheless, she has attracted public attention due to her high-profile affairs. She has been in an on and off relationship with the likes of Kareem Abdul-Jabbar, Freddie Prinze, and Richard Pryor. She was close to getting married in 1998 after she was engaged to Kevin Evans, a music executive. However, their engagement was short-lived, and it was cancelled in 1999. She has also been romantically linked to Peter Hempel.