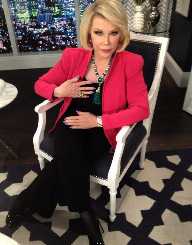 Joan Rivers was an American actress, comedian, television host, writer and a producer. She was born on June 8, 1933, in Brooklyn, New York. Her real name was Joan Alexandra Molinsky. She came into limelight in 1965 after she was hosted as a guest by her mentor Johnny Carson in his show "The Tonight Show."

In 1986, Rivers hosted her show "The Late Show with Joan Rivers" becoming the first woman to host a late-night television show. She hosted other shows and won several awards including Daytime Emmy Award for her popular shows.

Joan Rivers was born on June 8, 1933, in New York. Her parents were Russian Jewish immigrants. The mother was called Beatrice while the father was Meyer C. Molinsky. The father was a doctor who graduated from Long Island College of Medicine. Her elder sister was Barbara Waxler, and she passed on June 3, 2013, at the age of 82 years.

Rivers was brought up in Prospect Heights and Crown Heights in Brooklyn. She was raised together with her sister in a rather wealthy environment. Later on, her family moved to Larchmont.

Joan Rivers went to Brooklyn Ethical Culture Centre and later joined Adelphi Academy of Brooklyn. In 1950, Rivers was enrolled at Connecticut College. She attended this college until 1952.

Joan Rivers then went to Barnard College where she graduated with a Bachelor of Arts degree in English Literature and Anthropology in 1954.

Joan Rivers appeared in a short play "Driftwood" where she played a lesbian with Barbara Streisand. The play was shown for six weeks.

In 1960, Joan Rivers performed in many comedy clubs including the Gaslight Café and the Bitter end all in Greenwich, New York. In the same, she made her first appearance on a television program "The Tonight Show" hosted by Jack Paar. The exposure improved her skills immensely.

In 1965, Joan Rivers participated on Candid Camera as a gag writer where she attracted people into awkward situations for the show. She reappeared in The Tonight Show and also in The Ed Sullivan Show. She participated in The Swimmer in 1968 where she starred as Burt Lancaster.

In 1969, Joan had a big breakthrough when he started her show "That Show with Joan Rivers" with Johnny Carson being her first guest in the show.

Joan Rivers star continued rising, and she produced two comedy albums in the same year. The albums "The Next to Last Joan Rivers Album" and "Rivers Presents Mr. Phyllis and Other Funny Stories" brought her into the comedy limelight, and they did amazingly well and made her win appearances in essential comedy shows.

In 1970, Rivers appeared on several comedy shows including "The Carol Burnett Show" and "Hollywood Squires." In 1973, she wrote a black comedy movie starring Stockard Channing which performed well in the industry.

In 1978, she directed the film "Rabbit Test." The film starred her longtime friend Billy Crystal. Towards the end of the decade, she acted the opening act for various singers including Helen Reddy and Mac Davis.

Joan Rivers hosted "Saturday Night Live" on April 9, 1983. Around this season, she released a comedy album "What Becomes a Semi-Legend Most?" on Geffen Records. This comedy was well received in the comedy market and became a best seller. It even attained number 22 on the US Billboard. The comedy was also nominated for a Grammy Award for Best Comedy Album.

In 1980, Joan delved into stand-up comedies where she appeared on different Television comedy shows. In February 1983, she participated in a stand-up show at Carnegie Hall. In the same year, her star rose to the point of being identified by President Ronald Reagan and Nancy. Rivers was invited to a state dinner. The relationship became warmer, and she got an invitation in 1984 to speak at a luncheon during The Republican National Convention.

In 1984, she did a stand-up comedy show on the United Kingdom's television show "An Audience with Joan Rivers." In the same year, she published a humor book "The Life and Hard Times of Heidi Abramowitz" which became a fast seller.

In 1986, Joan Rivers fell out with her mentor Johnny Carson, the man who hosted Rivers several times in his show "Tonight show." The fallout was after Rivers took an offer from Fox Television Network to host a late night show "The Late Show Starring Joan Rivers." The timing of the program crashed with that of Johnny Carson making her a competitor. Carson learned about it through Fox. And when Rivers called him to explain the situation, he hung up on her. Joan was banned from ever appearing on the "Tonight Show."

In 1989, she hosted another show "The Joan Rivers Show" which did very well in the market. It earned her an award by Daytime Emmy for Outstanding Talk Show in 1990

In 1994, Joan Rivers co-wrote and starred in an award-winning play "Sally Marr and Her Escort."  She led to her nomination for the best actress in the play. Joan established her line of jewelry called Joan Rivers Collections. She promoted the jewelry in various radio shows in which she appeared including Howard Stern's radio show and The Shopping Channel.

On April 9, 2005, Joan Rivers was one of the few Americans that were invited to the wedding of Prince Charles and Camilla Parker Bowles. Prince Charles is the Prince of Wales. In his guest list, only four Americans appeared with Rivers being one of them.

In 2008, Joan Rivers appeared on Big Brother Show as one of the hijackers in the Celebrity Hijack session of the show. She also appeared in NBC show "Celebrity Feud" together with her daughter Melissa.

In August 2009, she began starring in a reality TV series "How'd You Get So Rich?" on TV Land. She also became the "pink carpet' presenter in the Sydney Gay and Lesbian Mardi Gras parade. In the following year, a documentary about her, Joan Rivers: A Piece of Work, premiered.

On January 25, 2011, a TV show "Joan and Melissa: Joan Knows Best?" showed on WE TV to show their work and careers and the challenges they encountered. The show ended in 2014.

In 1989, Joan Rivers was awarded a Hollywood Walk of Fame star.

In 1990, she won Daytime Emmy Award for Outstanding Talk Show Host in The Joan Rivers Show.

Rivers was awarded Grammy Awards for The Best Spoken Word Album ‘The Diary of a Mad Diva' in 2015.

She was married in 1955 to James Sanger. The marriage was annulled after six months when she discovered that Sanger did not want to have children.

On July 15, 1965, Rivers married Edgar Rosenberg, and they had a daughter, Melissa Warburg Rosenberg.

She had one grandchild called Edgar Cooper who featured in their WE TV series.

In 1987, Rivers showed her intention of separating with Rosenberg after 22 years of marriage. The separation would be due to what she described as a total failure. When Rosenberg learned this, he committed suicide the same year.

She died on September 4, 2014, after a one-month coma induced by a cardiac arrest during minor surgery.

Joan Rivers has openly inclined towards the Republican. She indicated that even her mother was a Republican.