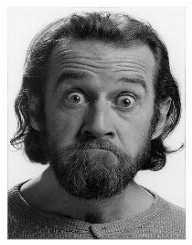 George Carlin was born in the American state of New York on the 12th day of May 1937 in the Bronx. George's father was an advert exec while his mother worked as a secretary. They were both named Patrick and Mary Beary. His parents however separated while he was still young but his mother was a strict religious lady.

George Carlin's relationship with his mother, however, became strained but he was actively involved in drama in his teenage years. He attended Bishop Dubois High School on a short spell after dropping out of Cardinal Hayes High School. He became active in the Spofford- based Camp Notre Dame afterward.

At the age of 17, George Carlin became a member of the Air Force services of the U.S. military. George started out as a radar technician, and after his training, he was based in Louisiana. He got court-martialed within a three year period and had to be discharged from the service in the year 1957.

George Carlin took disc-jockeying on a part-time basis even while working with the Armed Forces. He decided to full-time radio work when he joined KXOL radio in Texas after that.Carlin became a buddy to Jack Burns at this time, and they both staged shows at the coffeehouse called “The Cellar” that was operating right out of Fort Worth. This was still in the year 1959, but they moved in the following year to the state of California.

They were able to make an album although they broke up after a two-year stint together.

George Carlin was able to make the transition to TV after that and was on the “The Tonight Show” as well as “The Ed Sullivan Show.” He scripted and performed as “Jon Carson,” ‘The Indian sergeant” as well as “Stupid Disc Jockey.” George went ahead to release his solo album in 1967 and titled it “Take-Offs and Put-Ons.” The work was well-received and even earned a nomination at the Grammy’s. He embedded some of his usual TV routines in the album.

George put out his second album in the year 1972, and he included what was considered taboo themes as at that time. He popularized “Seven Words You Can Never Say on Television,” and this took a life of its own as its standout performance.

George Carlin got arrested after his album release in the year 1972, and he was accused of breaching the Obscenity Law. George became more of the headline hugger after his spat with the law, and his popularity soared. The NBC got George to sign for them in 1975 in the face of several offers that were dangled before him. He was the host when Saturday Night Live premiered on NBC, and he went on to be a frequent performer on TV. He was on the show, Tony Orlando & Dawn, which ran from 1976 to 1977.

George Carlin was well-sought after as a performer, but he had a heart ailment that took his energy and dulled his focus. The illness was traceable to his history of drug abuse which drained his health.

A Return To Comedy

After the time way due to his heart ailment, George Carlin made a comedy comeback when the 19802 dawned. He took off in 1982 with “Carlin at Carnegie Hall” and “Carlin on Campus,” followed in the year 1984. He reprised his rise in 1986 with “Playing with Your Head.” George Carlin got a cast role in the year 1987 on the set of “Outrageous Fortune,” which was a comedy movie that became a box office hit. He starred alongside A-lister, Bette Midler, and Shelley Lane. George Carlin also showed up on the set of “Bill & Ted’s Excellent Adventure,” where he played Rufus in this science fiction depiction. This movie also became a box office hit which was well-received by film buffs and critics.

George reprised his success in “Bill & Ted’s Excellent Adventure” with a sequel that was titled Bill & Ted’s Bogus Journey in the year 1991. George was cast in the next four years to 1995 in “Thomas & Friends’, which was a kiddies’ series on British Television. He also ran the course of three years to 1993 on Shining Time Station, where he played the role of Mr. Conductor.

By 1993, George Carlin worked with Sam Simon to create “The George Carlin Show,” and this was a sitcom. He played the role of George O’ Grady the cab driver and the show aired for the next two seasons. George managed to remain active in his last few years on earth and released a comedy album in 2008 that was titled “It’s Bad for Ya.”This album made it to the top of the U.S. Billboard Charts in the Comedy segment by snatching the second spot.

George Carlin was a comedian and never shied away from courting controversy. He had a career that stretched on for half a century before death snatched him. George lived to receive the “Lifetime Achievement Award” in the year 2001 during the American Comedy Awards. It was in recognition of his contributions to films and Television showcase of comedy. George Carlin also was a recipient of a total of five Grammys. His work, “It’s Bad For Ya” got him the 2009 Best Comedy album at the Grammys.

The most prominent influences on his career were cited by him to include Danny Kaye, Lenny Bruce, and the Marx Brothers.