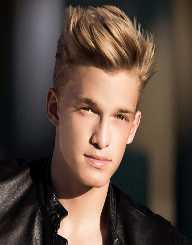 Popular Internet pop artist Devin Hayes was born on June 10, 1999, in Springfield, Illinois, USA. His father Mark Hayes was a musician by profession, and his mother Robin Hayes was a model. Devin also has an elder sister named Morgan Hayes.

Devin Hayes attended the Athens High School. Right from a very young age, Devin displayed a keen interest in music. During his school days, he actively participated in musicals and dreamt of being a social media sensation. By the time he attained the age of 9, Devin was well aware of his interests and what he wanted to become in life. With the aim of creating something that everyone will find relatable, he made his first video.

Devin Hayes was a technically sound kid who loved to spend time online and make proper use of the Internet and social networking channels. In 2011, Devin created his own YouTube channel and posted a video on it. However, Devin remained inactive on social media for two long years after his YouTube debut. On June 5, 2013, he took the first real step towards achieving his dream by posting a comic skit video on the video-sharing site Vine.

Devin Hayes began posting videos of different genres on the site, and slowly and steadily his fan base started to grow. Most of his videos were based on teen-centric themes like basic life hacks, comic skits, popular song covers, etc. With each passing day, more and more teenagers subscribed to his channel as they found Devin and his videos very relatable.

When Devin began posting popular song covers, his fans instantly fell in love with his voice. Along with YouTube, Vine, and Instagram, Devin started to make use of the live-broadcasting platform YouNow. His active presence on YouNow contributed a lot to his rising popularity. In July 2014, he collaborated with fellow Instagram star Carter Reynolds and posted a video titled ‘Super Vine w/ Carter Reynolds!’

Devin Hayes has also paired up with many other social media sensations like Trevor Moran, Nash Grier, Jack Johnson, Jack Gilinsky, etc. A large number of fans of Devin are females. In one such show at the Amsterdam Bar and Hall in downtown St. Paul, Devin Hayes, along with fellow social media star Jonah Marais, entertained a sellout crowd of 500 teens and most of them were girls.

Devin’s distinctive voice, new personality, unique style of videos and his willingness to create something different yet engaging are the significant factors that contribute to his ever-growing popularity and success. In real life, he is a very down-to-earth person and treats all his fans and friends with respect. He doesn’t let fame get to his head and tries to make the best use of his skills. His charming face and charismatic personality are also crucial reasons behind his immense popularity.

Devin Hayes' fashion sense is quite modern in taste. He has his line of merchandise too. Currently, Devin Hayes has more than 56k subscribers on YouTube, over 140,000 followers on Instagram and over 90k followers on Twitter.

Devin Hayes is backed by a very supportive family who encourages him in all his endeavours. He believes that his family is his most prominent critic as well as his support system. In the initial days, Devin’s parents were not familiar with social media and couldn’t understand why Devin used to spend most of his time indoors on his computer instead of playing outdoors. But once they began to understand the extent of his social media presence, they entirely supported him.

Devin’s father Mark acts as his manager too. Due to this, he can take complete care of Devin and also help him manage his studies properly. The 18-year-old likes to spend time with his family and friends. He is very fond of his cat named Wiley. Devin has been dating Hannah Marie Tharp for quite some time, and his girlfriend has also featured in his videos on YouTube, Vine, and Instagram.