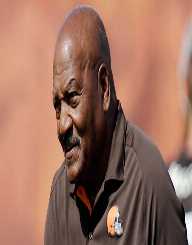 Born to Swinton Brown and Theresa Brown, Jim Brown was an African American football star who rose from humble beginnings to stardom. He was born on February 17th, 1936. As part of his successful career, he managed to play for the famous Cleveland Browns. His role in the game was a running back.

Jim Brown made records in this position, and this certainly earned him the Pro Football Hall of Fame recognition. He was not only prevalent in football, but also in the film industry. In 1967, he hung his boots to pursue an acting career. Some of the films that he was featured in include Kenner, Ice Station Zebra, and Dirty Dozen. He also brought changes around the environment where he was raised in as he was an essential civil rights advocate in the society.

Jim Brown was born in 1936, in St. Simon’s Island which is located in Georgia. His father, Swinton Brown was a professional boxer while his mother was a homemaker. The real name of Jim Brown is James Nathaniel Brown. During his early life, his life was full of hardships.

When Brown was just two weeks old, his father left them alone. This was a difficult time for Brown and his mother. It is at this point that Theresa opted to work as a maid to earn a living. To ensure that Brown was safe, she left him under the care of his great-grandmother.

Eight years later, when his mother was now comfortable, she took Jim Brown to live with her in Manhasset, New York. This was the place where she was working as a maid. Sooner or later, Brown joined Manhasset High School. Good things happened to him as he was thriving in his football career. His performance gained him recognition while he was in his senior year. As a running back, he had averaged 14.9 yards in each carry. This was just what he needed to get to Syracuse University.

While in his second year at Syracuse University, Jim Brown had scaled the heights of football to become one of the leading rushers on the team. He was also awarded for being the 5th in the Heisman Trophy. In addition to this, he began setting records for his school. He had the highest season average rush.

Jim Brown's number of touchdowns in a single game was also incomparable to any other player during this season of play. In a bid to recognize his unique performance, Jim Brown is an associate of The Pigskin Club of Washington D.C. This is an intercollegiate All-American Football Players Honor Roll.

The most impressive aspects of Jim Brown was that he performed well in some sports including track, basketball, and lacrosse. During his second year at the university, he was the second leading basketball scorer. In lacrosse, he was part of the second-team before he managed the top spot while he was in his senior year.

Career as a Pro

While drafting the National Football League in 1957, Cleveland Browns chose Jim Brown as their ideal sixth pick. The talented young Brown spent little time in showcasing his talents to the new world of competition he was going through. He was the league leader regarding his rushing yards of 942. This earned him the Rookie of the Year award.

This was just the beginning of his rise to stardom. The coming seven seasons were a significant success to Jim Brown. In all the NFL matches that he played, all defenses targeted to stopping him. In spite of this, Brown kept breaking the records in the subsequent years including 1958, 1959, 1960, 1961, 1963, 1964, and 1965. The only time when Brown had not performed well according to his records was in 1962. During this year, he had 996 rushing yards.

Jim Brown stepped aside from football when he was still young. He was only 30 years old when he decided that he should make the best out of the fame he had earned in football. It is at this point that Brown chose to shape up his acting career.

At first, people thought that he would be back, but Brown had made up his mind. His film career was a success as he went forth to be featured in over 30 films. Some of them include “The Dirty Dozen,” “The Grasshopper,” Three the Hard Way,” and “100 Rifles”.

Despite the success that was following Jim Brown, there were also other controversies that came up. For instance, in 1968, he had been accused of throwing his girlfriend at that time from a second-story balcony. It did not take time before he was charged again with assaulting another individual over a road accident.

Brown was temperamental, and this also led to charges being imposed on him over alleged smashing of his wife’s window in 1999. In 2002, he was jailed for up to 6 months for refusing to attend counseling lessons.

Jim Brown showed full support for African-American programs. He has been on the frontline trying his best to ensure that gangway of life is not associated with Black Americans. Along with big names such as Magic Johnson and Michael Jordan, he remains to be a role model to other young black athletes.