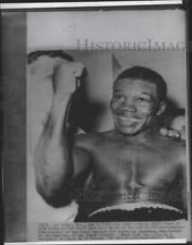 Benny Paret was famously known as “the Kid.” He was famed for being a Cuban boxer. He fought in the welterweight category.  During the 1960s, he earned high acclaim for bagging home the World Welterweight Championship title for two times. His cause of death was as a result of the injuries that he incurred in the ring while defending his title against Emile Griffith. This fight was televised live in one of ABC’s boxing shows called Fight of the Week.

Throughout Paret’s boxing career his career turning point came after he defeated Don Jordan on May 27th, 1960. Winning this fight meant that he was the welterweight champion. The following year, he had to defend his title against Emile Griffith. During this fight, his rival Griffith knocked him out during the 13th round. He lost his title to Griffith in April 1961. However, later that year in September, he regained his title.

After about two months, Benny Paret was in the ring again fighting Gene Fullmer, a middleweight champion. Fullmer was tough on him as he knocked him out in the 10th round.

Regardless of the close fights that Benny Paret had contested in, it was only after three months that he decided to defend his title against Griffith. This fight had been booked to occur on March 24th, in 1962. The location of the fight would be at Madison Square Garden. Just like other previous big boxing fights, this match would be aired on ABC live.
Paret performed well in the 6th round as he nearly knocked his opponent out. Griffith was lucky enough as the bell rang saving him from the close punch. Moments later, during the 12th round, Griffith threw numerous punches on Paret. This left Paret helpless as the referee did not blow any whistle stopping Griffith. Paret was knocked out as a result and collapsed seconds later. He immediately went into a coma, and it was alleged that it was out of his exhaustion. Ten days later Paret was pronounced dead.

Following the death of Benny Paret, controversies soon followed. It was evident that his cause of death was the numerous injuries that he gained while fighting in the ring. He had contested in three matches in just a year. Boxing authorities in the New York State were highly criticized for offering their official permissions to Paret to contest in these three fights. The referee during the last fight named Ruby Goldstein was also criticized for failing to stop the fight when it was required.