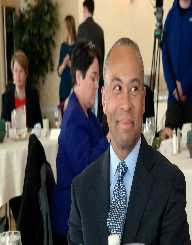 Deval Patrick was born on the 31 July 1956 in South Side, Chicago to Laurdine Patrick and Emily Mae Wintersmith. When Patrick was three years old, his father left the family and settled in New York City. His mother brought him up as a single mother, and she sometimes had to rely on social welfare cheques for support.

After passed his State Bar exam in California, Deval Patrick worked as a law clerk for Judge Reinhardt at the US Court of Appeals. He then worked at the NAACP Legal Defense Fund. Around this time he met Bill Clinton when he was involved with a case against him in his role as Governor of Arkansas.

President Bill Clinton appointed Patrick as the US Assistant Attorney General for Civil Rights in 1994. He was involved in various issues including police misconduct and racial profiling.

Patrick joined Day, Berry & Howard in 1997. During this time he was appointed Chairman of Texaco's Equality and Fairness Task Force. He was also on the board of United Airlines. In 1999, Patrick joined the General Counsel of Texaco taking care of legal affairs of the business. In 2001, he was appointed Executive Vice-President, General Counsel and Secretary at The Coca-Cola Company. He was on the board of ACC Capital Holdings.
He later joined Bain Capital (2015) and is Managing Director of the company.

Deval Patrick was the first African-American Governor of the state of Massachusetts. In 2015, Harvard University presented him with an honorary Doctor of Laws. In Chicago, the street where he lived as a child has been renamed Deval Patrick Way.

Deval Patrick is a Presbyterianism.Personal Life and Legacy

Patrick married his wife Diane in 1984, and the couple has two daughters, Sarah and Katherine. The family home is in Milton, Massachusetts. Daughter Katherine announced in 2008 that she is a lesbian and Sarah is married to Marco Morgese.

He has been awarded several honorary degrees and has served on many nonprofit and corporate boards. He has also authored two books.