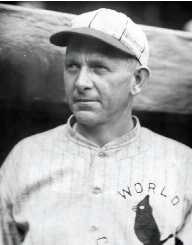 Wesley Branch Rickey was born on December 20, 1881, in Ohio, USA. His parents were Emily Brown and Jacob Rickey. His brothers were Frank and Orla Rickey.

As a young adult, Branch Rickey enrolled at Ohio Wesleyan University. While at this school, Rickey played both football and baseball. He later graduated from this school in 1904.

In 1907, Branch Rickey resumed his education, this time attending the University of Michigan Law School. He later graduated from this school in 1911.

After graduating from college, Branch Rickey began to play baseball for the Cincinnati Reds. However, he soon lost his spot on the team because he refused to play on Sunday for religious reasons. It then wasn’t until 1906 that he joined another team-- the St. Louis Browns. Around the same time, he also played for the New York Yankees. However, he took a break from professional baseball in 1907 to continue his education.

After graduating from the University of Michigan Law School, Branch Rickey returned to baseball, but not as a player. Instead, he joined the St. Louis Browns as the field manager in 1913. While Branch Rickey was working with this team, they changed their name to the St. Louis Cardinals. He later president in 1917, and then became the manager again in 1919. In 1925, Branch Rickey became the general manager for the team-- a position he would hold until 1942.

In 1943, Branch Rickey left the Cardinals and joined the Brooklyn Dodgers as a general manager and president. It was while working with this team that he ended the segregation between black and white baseball players on his team. He did this by purposefully scouting for black players to add diversity to his teams. Up until this point, black baseball players would play on all-black teams, which were generally less popular than all-white teams. One of the most famous black baseball players that Branch Rickey signed onto his team was Jackie Robinson. Rickey later left the Dodgers in 1950.

After leaving the Dodgers, Branch Rickey began working as the general manager and vice president for the Pittsburgh Pirates. During his time with this team, he was able to see black baseball players join many formerly all-white teams around the country. In the early 1950’s, the last of the all-black baseball teams disbanded, in part because of Rickey’s work. Branch Rickey continued to work with the Pirates until this retirement.

Branch Rickey has a place on the St. Louis Walk of Fame (which he earned in 1997, posthumously).

Branch Rickey died on December 9, 1965, in Columbia, Missouri, USA. The cause of his death was heart failure. He was 83 years old when he passed away.

The Rotary Club of Denver gives out the Branch Rickey Award annually to major league baseball players who are known to perform acts of community service.