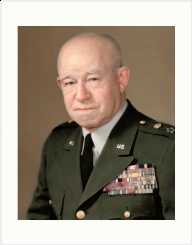 Omar Bradley was born on February 12, 1893, in Clark, Missouri, USA. His parents were Elizabeth Hubbard and John Bradley.

After graduating from high school, he went on to study at West Point. He graduated from this school in 1915.

Bradley later went onto attend the Command and General Staff College, Fort Leavenworth, Kansas, USA. He graduated from this school in 1929. After this, he began working at the school.

Omar Bradley is most famous for his participation in the United States Army during World War II. He was stationed at Fort Benning in 1941 and was put in charge of the Infantry school there. He was soon promoted to major general, in 1942, and given the command of the 87th division.

One of the most significant accomplishments of this war was his capture of Bizerte, Tunisia. At the time, he was under the command of General George S. Patton (who also became famous in his own right). His capture took place in 1943. With the capture of this place, over 250,000 Axis-power soldiers surrendered. Shortly after this accomplishment, Bradley succeeded Patton.

Another one of Omar Bradley's significant contributions to the war was his planning of the Normandy Invasion. He was chosen by President Eisenhower to do this, as Bradley was best known for his skill in command and making strategic plans. As well as planning the attack, he also participated in it.

In 1944, Omar Bradley was made an army group commander. He kept this position until the end of World War II.

By the time Bradley left the army, he had achieved the rank of General. At this time, he was one of only a few Americans who had ever earned the rank of five-star General. During this time in the military, he earned the record for commanding the most troops in an American army; through the course of all of the positions of command he served, he commanded a total of over a million soldiers.

After World War II ended Bradley began to work as the Administrator of  Veteran Affairs. He held this position until 1947.

In 1948, Omar Bradley became the Chief Staff of the United States Army. He held this position until 1949.

Bradley was appointed to the position of the chairman of the Joint Chiefs of Staff in 1949. He was the first person to take on this new position. He held this position until 1953. It was at this time that Bradley officially retired from active duty from the military.

All of Omar Bradley's awards and accomplishments are due to his long military career. Some of his most impressive awards are listed below.