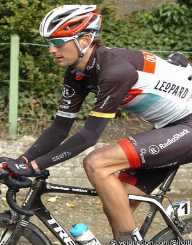 Professional road bicycle racer Andy Raymond Scheck was born on June 10, 1985, in Luxembourg City, Luxembourg. He is the youngest of three sons of Gaby and Johny Schleck. His older brother Frank was also a cyclist, but his oldest brother is a politician in Luxemburg.

Andy Schleck comes from a family of road cyclists. His father was also a professional cyclist and rode the Tour de France, reaching Top 20 in 1970 and 1967. Schleck’s grandfather Gustav contested in road bike events during the 1930s.

In 2004, Andy Schleck joined the VC Roubaix cycling club. While at the club, he caught the attention of a sports director CyrilleGuimard. Guimard later became a famous sports director for several Tour de France winner, like Bernard Hinault, Lucien Van Impe, and Greg LeMond. At the time Guimard met Schleck, he described him as one of the biggest talents he has ever seen and saw a great future for the young cyclist.

In 2004, while still an amateur, Schleck went to compete in the Fleche du Sud race and won. The word about the new talent spread quickly and caught the attention of the Danish Team CSC. The manager Bjarne Riis asked Schleck’s brother Frank, who was on the team, about his brother. The same year, Andy started as a stagiaire- amateur rider for the professional Team CSC.

In 2005 season, Andy Schleck secured a contract with Team CSC and made his debut in ProTour race in the 2005 Volta a Catalunya. The same year, he and his brother were the leaders in the National Championships. Frank took the road race title, while Andy won the individual time trial. The following year, Andy was in a major crash during the GP Cholet race and had to take an eight-week break. After recovering, he participated in the Volta a Catalunya. In July the same year, his brother won the Alped’Huez stage od Tour de France, but he won the major mountain stage in the Sachsen Tour, finishing the race 23rd overall.

The year 2009 marked Schleck’s biggest victory so far in his career. Andy Schleck won the Liege-Bastogne-Liege race and became the first winner from Luxemburg since Marcel Ernzer in 1954. Just several days before this race, he finished second in the La Fleche Wallonne race. He finished second in the Tour de France and won the young rider classification in the process.

In the 2010 Tour de France, Schleck finished second again to Alberto Contador and again won the young rider classification. During the race, Schleck was in the leading position, when his chain fell off. Contador did not stop to help him and took the lead position. During this mountain section, Schleck lost 39 seconds, which eventually cost him the 1st place. However, in 2012, after Contador’s CAS hearing for the use of doping, he was stripped of the title, which was awarded to Schleck.

In 2010, Andy and Frank announced their departure from Team Saxo Bank and formed a brand new Luxemburg based team. Team Saxo Bank hired Alberto Contador as Schleck’s replacement, but his contract was terminated following the doping scandal. The new team was named Leopard Trek. In the 2011 season, Schleck finished Liege-Bastogne-Liege race in 3rd position. In the Tour de France, Schleck had a slow start but at the end, finished the tour in 2nd position. His brother Frank took the third place, making them the first siblings in the tour history to take the podium.

In 2012, Leopard Trek merged with Team RadioShack and created the RadioShack-Nissan team. In the 2012 Criterium du Dauphine, Schleck had to drop out due to a severe crash in the 4th stage and a worsening knee injury. He also suffered a sacrum fracture. He announced that due to his sustained injuries, he would not be participating in Tour de France. In October the same year, Schleck attempted a comeback in the Tour of Beijing.

In the 2013 season, Schleck competed in the Tour Down Under but had to withdraw in the final stages of the race due to mechanical issues. He withdrew from several races that year but competed in the Criterium International. He rode Tour de Suisse in preparation for Tour de France. During this season, he finished Tour de France in 20th position. The following season, Schleck withdrew from Tour de France due to sustained injuries after a crash in stage three. In 2014, he announced his retirement citing knee injury. After retiring, he opened a bike shop and cared in Itzig, which also includes a small museum with souvenirs from his racing career.