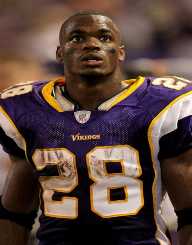 Adrian Peterson was born on the 21 March 1985 in Palestine, Texas. His parents were Nelson Peterson and Bonita Brown. Both parents were good athletes. His father had wanted to be a basketball professional, but he was injured in a domestic accident. His mother Bonita was a long jumper and sprinter. Peterson had an older brother Brian who was killed by a drunk driver when he was nine years old. As a nine-year-old. Peterson was seven at the time.

At the early age, Adrian Peterson showed an exciting sport and displayed talent in the youth teams he played for. He was encouraged by his coach as well as his father, and he played in Anderson County Youth Football games. Peterson's uncle, Ivory Lee Brown, was an NFL player.

Adrian Peterson attended Palestine High School where he was involved in the sport playing football and basketball as well as participating in track events. He later attended Oklahoma University, majoring in sociology.

During his junior year, Division One recruiters started to pay attention to him, and Adrian Peterson was the subject of a debate as to whether or not players should be able to transit directing from the preps to playing professionally. Peterson continued with track and field, showing great potential as a sprinter.

By 2004 he was regarded as the number one running back and prospect. In his senior season, he won the Hall Trophy as the US Army National Player of the Year, and College Football News named him the top high school player. From 2004 to 2006, Peterson played for the Oklahoma Sooners football team at the University of Oklahoma.

Adrian Peterson applied to enter the NFL Draft in 2007 and by that time some commentators were naming him as one of the top three draft picks. Peterson was selected by the Minnesota Vikings. He was signed in July 2007, and his contract was $40.5 million over five years

Over the course of his career, Adrian Peterson became the third Vikings player to earn NFL honors. He led the NFL in rushing three times and posted a second-best rushing yardage season in NFL history of 2,097 yards in 2012, In 2007 he set the NFL single-game rushing record of 296 yards in the eighth game of his career.

Adrian Peterson has had tragic events occur in his life. His father was jailed for ten years when he was thirteen. A half-brother was murdered, and he lost a child he had never met when the boyfriend of the child’s mother assaulted the little boy. The boy died in 2013 shortly after Peterson visited him in hospital. Peterson was prosecuted for beating his four-year-old son with a switch. He was not jailed and entered into a plea agreement. He was fined $4000 and had to undertake eighty hours of community service.

Adrian Peterson is married to Ashley, and they have two children together.

Adrian Peterson has worked in Africa the offseason, helping disadvantaged children as well as adults with hearing problems. He has done this in conjunction with Starkey Hearing. He is a sponsor of the AAU girl’s basketball team in Texas. Adrian Peterson has a foundation, the All Day Foundation that works with you and focuses on giving back to society.