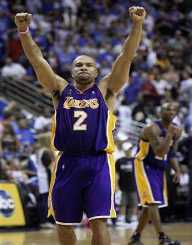 Derek Fisher is a former basketball player who played as a point guard for the L.A. Lakers. He was part of the team in their three consecutive championship wins (2000 – 2002). After retiring from professional basketball Fisher has become a coach.

Derek Fisher was born on August 9, 1974. His birthplace is Little Rock, Arkansas and his star sign is Leo. His parents are John and Annette Fisher. His father had served in the military before taking up a job at the post office, and his mother was a banker. As a young boy, Derek Fisher took inspiration from his parents’ drive for work and used it to excel at basketball. He has a brother named Duane, who was also a professional player.

As soon as Derek Fisher was old enough to play, Fisher started with basketball. He showed great promise at school events. He went to the Parkview Arts & Science Magnet High School. They went on to win an Arkansas state championship. He passed out in 1992. Fisher then joined the University of Arkansas and impressed a lot during his college years with his basketball skills.

By the time he left college, Derek Fisher had developed a reputation as one of the best point guards in the country. He was drafted by the L.A. Lakers in 1996 alongside Kobe Bryant and Shaquille O’Neal. The trio was instrumental in the triple series win from 2000 to 2002. Kobe and Fisher especially became close friends and pushed each other to improve their game. For his commitment and work ethic, Derek Fisher soon became one of the most respected players in the NBA history. Fisher mainly played as a point guard throughout his career and averaged 6 points per game.

IN 2004, Derek Fisher Fisher created history. The Lakers were tied 2-2 against the San Antonio Spurs and needed a win badly to move to the NBA finals. They gave away a 1-point lead with only 0.4 seconds left in the game. That’s when the Fisher magic happened. He took a pass, and sent the ball through the rim scoring for his team and winning them the match before the clock ran out. With only 0.4 seconds to spare, it was a miraculous feat and display of speed and agility. The Lakers moved to the NBA finals. The finals went bad, however, as the Detroit Pistons defeated the Lakers. Shortly after this, the Lakers’ stars went separate ways.

Derek Fisher joined the Golden State Warriors and played two seasons for them. He then played for the Utah Jazz. Fisher is currently a well-respected basketball coach. As a coach, he has worked with the New York Knicks from 2014 to 2016.

Derek Fisher married in February 2005 to Candace Patton. They had four children – Drew, Tatum, Marshall, and Chloe. Derek and Candace remained together till 2016 after which they divorced.

It is rumored that he is now dating Gloria Govan, ex-wife of his former teammate Matt Barnes.Fisher is a Christian by faith.