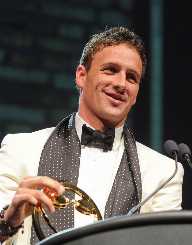 Ryan Lochte is a multiple Olympic gold medalist and swimming champion from America. He has won 12 Olympic medals which include six gold medals, three silver, and three bronze medals. He has a total tally of 51 international medals. Lochte is extremely popular not just for his swimming but also for his good looks.

Ryan Lochte was born on August 3, 1984. His full name is Ryan Steven Lochte, and his star sign is Leo. His birthplace is Rochester, New York. Lochte’s parents Steven & Ileane are swimming coaches, and so it was no surprise that Ryan started swimming at a very early age.

Although Ryan Lochte was more interested in other sports like basketball, Lochte participated in the Junior Olympics in the swimming event and came second. This developed his interest in swimming, and he began taking it seriously. He went to the University of Florida for college, where he won multiple championships.

Ryan Lochte's first major event in his swimming career came in 2004 when he qualified for the Olympic Games in Athens. He teamed up with Michael Phelps and two others to win the 4 x 200 relay gold medal. In the solo event, he won silver, and the gold went to Phelps.

When Ryan Lochte participated in the 2016 Olympics, he became only the third American swimmer to have competed in four Olympics alongside Michael Phelps and Jason Lezak. He also won his 12th Olympic medal at the London Olympics.

Ryan Lochte launched and appeared on his TV show What Would Ryan Lochte Do? The show aired in 2013 on the E! channel. He has also done cameo appearances in several TV shows. Lochte appeared on season 23 of Dancing with the stars with professional dancer Cheryl Burke as a partner.

Ryan Lochte created controversy at the Rio Olympics by claiming that he and three other swimmers were robbed at gunpoint. The claims were later found to be untrue and it was revealed that Lochte and his friends were drunk. They were vandalizing property at a gas station and were asked to leave by the security guard who had a gun. Lochte finally accepted his fault and apologized publicly on Twitter and Instagram. He was charged with false reporting of a crime.

Ryan Lochte is in a relationship with former Playboy Playmate Kayla Rae Reid. They got engaged in October 2016, and a son named Caiden Zane was born in June 2017.