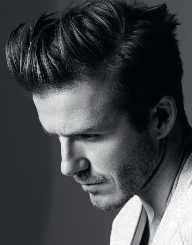 David Beckham is a soccer player, who is also a model and ambassador and patron of many charities.

David Robert Joseph Beckham was born on 2nd in May 1975. David was born at Whipps Cross University Hospital in Leytonstone, London. His parents are David Edward Alan "Ted" Beckham, a kitchen appliance repairman and Sandra, a hairdresser. He has an older sister Lynne Georgina and younger sister Joanne Louise.

David knew that he wanted to be a soccer player since young, he regularly played for the Ridgeway Rovers team, where his father was one of the coaches. David Beckham attended Chase Lane Primary School and Chingford County High School. After high school, he attended Bradenton Preparatory Academy, where he signed into Manchester United’s Youth Training Scheme on his fourteenth birthday.

During his school years, he won a training session with Barcelona via Bobby Charlton’s football school. He played for Tottenham Hotspur Football Club, and he also played for Brimsdown Rover’s Youth team.

In 1991, David Beckham and a few young players were part of Manchester United’s trainee team, his success in training lead to him being signed as professional in 1993, aged eighteen. David Beckham quickly made his mark as a right-sided midfielder in 1995, scoring goals but did not make into the squad until the 1996 season.

David Beckham was given the number 10 shirt on the first day of Premier League season, and he scored his famous goal against Wimbledon. That goal was voted as one of the 100 greatest sporting moments, and won him an endorsement deal with Adidas, as he kicked the goal in an Adidas Predator. When Eric Cantona retired, David Beckham picked up the number 7 shirt, which was worn by other legends such as George Best, Bryan Robson, and Cristiano Ronaldo.

In 2003, he transferred to Real Madrid, after speculation of a fallout between him and manager Sir Alex Ferguson. The manager had become unhappy with David’s reduced commitment to the club after marriage and a child. In Real Madrid, he picked number 23, which was basketballer Michael Jordan’s jersey number. At the same time, he switched agents from Tony Stephens to Simon Fuller, who was already managing wife Victoria Beckham’s career.

After four years of playing with Real Madrid, David Beckham moved to L. A. Galaxy in 2007; the team sold more than five thousand tickets after announcing that they had signed a five-year contract worth US$32.5 million in total. David Beckham chose the number 23 again and was captain of the team immediately on joining. During his time with Galaxy, he was also on loan to Milan.

In 2013, David Beckham transferred to Paris Saint-Germain in a five-month deal. He had donated the salary that time will be donated to a local children's charity. On 16 May 2013, David Beckham announced that he would retire after the season, ending his twenty- one year career.

It may be his 1997 goal that made David Beckham a soccer star, but he became a household name after his marriage with Spice Girl’s Posh Spice, Victoria Adams. The couple married in 1999, David Beckham moved agencies in 2003.

2002, David Beckham was hailed as the ultimate "metrosexual," and together with wife Victoria Beckham, he became a fashion icon and spokespeople for many large brands. In 2012, Beckham started an underwear line for the company H&M. David Beckham has eponymous video games, including Go! Go! Beckham! Adventure on Soccer Island, and he was the brand ambassador for EA Sports Active.

David Beckham makes a cameo appearance in films such as Goal! Movie series (1, 2 and 3). He also appeared as a projectionist in The Man from U.N.C.L.E.

David Beckham is married to Victoria Adams, formerly Posh Spice from Spice Girls. They tied the knot at Luttrellstown Castle in Ireland, on 4 July 1999. Together they have three children: Brooklyn, Romeo, Cruz and Harper Seven. David Beckham reportedly suffers from obsessive-compulsive disorder, which makes him "have everything in a straight line or everything has to be in pairs."

David Beckham has won around forty awards, including Officer of the Order of the British Empire in 2003, Premier League Goal of the Decade (1996) and Choice Male Athlete in Teen Choice Awards.

David Beckham is a UNICEF supporter and became a Goodwill Ambassador in 2005. He has the special focus on their Sports for Development Program. He launched the David Beckham UNICEF Fund, aimed to help protect children in danger.

He also supports Unite for Children, Unites Against AIDS campaign. He is also a patron of the Elton John AIDS Foundation and a founding member of Malaria No More UK Leadership Council. After he joined Major League Soccer in America, he became an advocate for "MLS W.O.R.K.S."