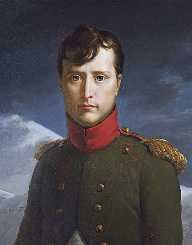 Napoleon Bonaparte was born on the 15 August 1769 in Ajaccio on the island of Corsica. At the time, Corsica was occupied by the French who had acquired it from Genoa in 1768. His parents were Carlo and Letizia Bonaparte and part of the island's bourgeoisie. Carlo Bonaparte had once been in the Corsican resistance to French rule but had made peace with the French.

His father died when Napoleon, aged 15, was studying in France and left the family in a precarious financial position which his eldest son, Napoleon had to take responsibility for.

Napoleon Bonaparte was homeschooled until the age of nine, then sent to France where he attended a military school in Brienne, France before doing a year at a military academy in Paris, France (1778-1785). Upon graduation, out of a class of 58, he ranked 42.

After graduating from the military academy in September 1785, Napoleon Bonaparte was made a 2nd lieutenant of artillery. He returned home to Corsica before rejoining his regiment in June 1788. At that stage of his life, Napoleon considered himself a Corsican and that the island was entitled to self-rule.

Then in 1789, the French Revolution occurred, and the new French National Assembly allowed the resistance leader Pasquale Paoli returned to Corsica. Napoleon returned to Corsica and was welcomed back but later when Napoleon’s younger brother Lucien accused Paoli of traitorous behaviour with British connections, the family were not wanted on the island, and Napoleon left for France.

In 1793, Napoleon Bonaparte had his first major military victory at Toulon where he banished the British troops and recaptured the port. He was the made a brigadier-general. The Commissioner of the Army was Maximilien Robespierre’s brother, and he wrote a letter to Robespierre commending Napoleon and his military prowess.

In February 1794, Napoleon was made Inspector of Artillery in the Army of the Alps. A royalist revolt began in Paris in late 1795 and Napoleon was called upon to quell it. As the royalists moved towards the National Convention in Paris on the 5 October 1795, they were confronted by the army and 300 royalists killed. He was then made commander in chief of the Army of Italy and sent to Italy where he had a number of significant victories and won control of northern Italy (1796-1797).

He was then sent to Egypt and faced the British in the Battle of the Nile. British Admiral Horatio Nelson’s tactics led to the defeat of the French with the fleet destroyed and 35,000 of Napoleon’s men trapped (1798). When Russia and Britain joined forces against the French Napoleon, and Emmanuel Sieyes carried out a successful coup which saw Napoleon installed as the first consul.

Between 1799 and 1804, Napoleon Bonaparte had a series of brilliant military victories which finally brought peace and he also implemented the Napoleonic Code at home. 1804, a plot to assassinate him and restore the monarchy was unearthed. Napoleon decided that only a hereditary empire would legitimise his status. He subsequently crowned himself Emperor of France. Peace did not last long. One thousand eight hundred five ended with the Battle of the Three Emperors.

Napoleon was outnumbered against the Russian and Austrian troops. Despite being outnumbered, he was victorious. In October, Lord Nelson had been killed at the Battle of Trafalgar. From 1809, British troops in the Iberian Peninsula were led by Arthur Wellesley, later the Duke of Wellington.

Napoleon's ambition to invade Britain had been thwarted at the Battle of Trafalgar, and he then used trade blockades to damage the British economy.  Napoleon was at the height of his power in 1811, with victories in Germany, Italy, and Holland. Then in 1812, his disastrous Russian campaign took place which led to his retreat from Moscow and the death of tens of thousands of his troops.

Napoleon Bonaparte was disposed as Emperor and exiled to Elba. He subsequently escaped in 1814 and landed in France where he got an army together, occupied Paris and reinstated himself as Emperor. France was weak from the Napoleonic Wars, and when the Russians, Prussians, and British attacked, they fought bravely but were no match at the Battle of Waterloo. Napoleon was exiled to the British territory of St Helena, a remote island in the South Atlantic. Napoleon died on St Helena on May 5, 1821, from a stomach complaint, possibly cancer.

Napoleon Bonaparte's first wife was Josephine Beauharnais. She was a widow of 32 years with two children when they married. Her first husband had been killed on the guillotine during the Reign of Terror. Josephine was unable to produce an heir and Napoleon had the marriage dissolved on the 16 December 1809.

His second wife was Marie Louise, the eldest child of Emperor Francis I of Austria. At the time of the marriage, Napoleon had never seen Marie Louise and her uncle Archduke Charles stood proxy for Napoleon at their wedding in March 1810. On the 20 March 1811, Marie Louise gave birth to Napoleon’s son who was named after his father.