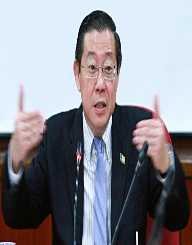 The Fourth Chief Minister Of Penang, The Current Secretary General Of The Malaysian Democratic Action Party

Lim Guan Eng is known as a Malaysian Politician who currently acts as the Chief Minister of Penang. For more than a decade he has served as the Secretary-General of the Malaysian DAP. Hailing from a well-vast background, Lim has passed through a different level of careers. He once served as senior executive at local cooperate bank before opting to lead as a politician. It was in 1986 that he stepped his first foot in the government as a member of parliament. After several years down the line, he was elected as the Social Youth chairman. It was a position that made him be appointed as the Deputy Secretary-General. The Democratic National Party acted as the leading team in Penang. In the course of general elections, the DAP took the lead where Lim was appointed as the Chief Minister of Penang.

On 8th, December 1960 Lim Guan Eng was first seen in the world in Malaysia. He was born to Neo Yoke Tee and Lim Kit Sian. His protective father also acted as a promising politician and a leader of the DAP in Malaysia. Lim joined La Salle Primary English School for his early education. He was later enrolled at Batu Pahat Montfort Primary School. Afterward, Lim joined Batu Pahat High School as well as Malacca High School. It was at the University of Monash that he majored in economics where he also received his bachelor’s degree. In 1983 he went to pursue Accounting at Monash University where he was also appointed as the leader of the varsity.

After the completion of his studies, Lim landed a white-collar job. He worked as a senior executive at a local bank. He tried to venture into politics in 1986 where he got a seat as the youngest Member of Parliament. He remained in the position for five years.

In 1987 following his activist norms, Lim found himself behind bars. However, he was released due to lack of enough evidence. In the mid of 1990, he was appointed as the DAP Youth chairman and later the Deputy Secretary-General.
In 2008 Lim Guan vied for DAP seat where he won with a majority of votes. Although Penang wasn’t his native land, he was appointed as the playing Chief Minister. He took an oath on March 11; 2008. His rule has led to an array of economic development and investments. He also introduced several schemes including free bus services and financial aid to the elderly. In 2013 he was re-elected to the position as the Chief Minister of Penang.

In 1995 Lim was sent to behind bars due to his hostility behavior towards the administration of Malaysia. It was later announced that he cruised the Malaysia government for not handling a case that was made against Tan Sri.He was imprisoned for a year and a half. As a result, Lim was restricted from vying for any legislative seat for five years.

It was during Lim’s tenure that the Penang government came up with a notion called the Competency, Accountability, and Transparency in governance. Lim is also planning to turn Penang into a clean and safe environment. He has managed to control, the level of corruption and as well as lowering down a high standard of living. Lim Eng tied a nuptial knot with Betty Chew, a Chinese politician from the DAP. The union has four children: Clint Lim, Marcus Lim, Ethan Lim and Rachel Lim.