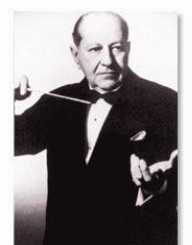 The composer Sigmund Romberg was born on the 29 July 1887, in Nagykanizsa, Hungary. His parents were Clara and Adam Rosenberg.

Sigmund Romberg showed musical talent as a very young child, and his parents arranged for him to learn the violin and piano from the age of six onwards.

Sigmund Romberg attended Osijek Gymnasium and then enrolled at the University of Vienna to study engineering but was side-tracked by his exposure to music in Vienna.

After immigrating to the United States, Sigmund Romberg found work in New York City working in a factory and playing piano in cafes. Around 1912, he started a music orchestra which featured some of his compositions. This brought him to the attention of Broadway producers JJ and Lee Shubert who offered him a job as their house composer. He teamed up with lyricist Harold Atteridge, and they wrote some musicals including The Midnight Girl (1914), The Passing Show (1914) and Maid in America (1915). Sigmund Romberg was a prolific writer who found his first major success with Maytime (1917). Ride Johnson Young wrote the lyrics and Romberg adapted it from the Viennese operetta Wie einst im Mai.

One of Sigmund Romberg’s most successful compositions was The Student Prince (1924) with Dorothy Donnelly doing the lyrics. The Student Prince was an adaption of Old Heidelberg, a German play. Songs include The Drinking Song and Serenade as well as Gaudeamus Igitur, a traditional German song. Romberg’s next big achievement was The Desert Song (1926) with Oscar Hammerstein II and Otto Harbach. Then in 1928, Sigmund Romberg teamed up with Hammerstein III again to write New Moon. New Moon featured the hit Lover Come Back to Me. He had yet another hit in 1928, Rosalie, which was done in collaboration with George Gershwin and P.G. Wodehouse.

Sigmund Romberg continued writing music for operettas, but the public taste had changed, and musical comedy was becoming more popular. He turned his attention to film music and wrote Viennese Nights (1930) and The Night is Young (1934) in collaboration with Hammerstein.

The Night is Young featured the classic When I Grow Too Old to Dream.

During the 1940s Sigmund Romberg formed his orchestra once more and toured around the United States. He was also heard on the radio.

Sigmund Romberg final Broadway production was Up in Central Park (1945).

Notable achievements were the composition of the score for numerous Broadway production including The Student Prince, The Desert Song and The New Moon including classic songs such as When I Grow to Old to Dream and Lover Come Back to Me.

In 1970, Sigmund Romberg was inducted into the Songwriters Hall of Fame.

In 1954, a biographical movie was made about his life, starring Jose Ferrer as Romberg and Merle Oberon as Dorothy Donnelly. The movie was directed by Stanley Donen and written by Elliot Arnold and Leonard Spigelgass.