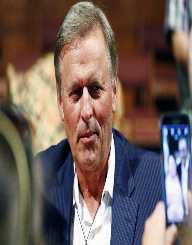 John Grisham is a writer, attorney, and a political activist. He is well-known for his fiction book and legal thrillers. Among his bestselling books is ‘The Firm’ featured in a 1993 ‘The Firm’ film and a 2012 TV series. Notably, he has written a legal thriller for Children known as ‘Theodore Boone’ and has earned several awards including the Peggy V. Helmerich Distinguished Author Award in 2005.

John Grisham is a second born son of parents Wanda Skidmore Grisham and John Grisham, born on February 8, 1955, in Jonesboro, Arkansas. At the age of four years, Grisham’s family moved and settled in Desoto, Mississipi. He converted to Christianity at the age of eight and participated in Missionary work with the Baptist Church of Oxford after leaving law school.

Grisham used to work in a nursery where he watered bushes, and at the age of 16, he took a job with a plumbing contractor. His childhood experiences motivated him to write his first book, ‘A Painted House.’ Later at the age of seventeen, he started working on a highway asphalt crew and joined the Northwest Mississippi Community College in Senatobia. He then took a job as a sales clerk in retail and later enrolled at Delta State University in Cleveland.

Grisham changed his colleges three times before completing his BS degree in accounting from Mississippi State University in 1977. He also enrolled in the University Of Mississippi School Of Law with the aim of becoming a tax lawyer but shifted to Civil Litigation graduating with a JD degree in 1981.

After his graduation, Grisham practiced law for ten years and became the member of the Mississippi House of Representatives from 1983-1990. He represented the seventh district which included Desoto County after winning the election as a Democrat. During his second term, he became the Vice-chairman of the Apportionment and Elections Committee.

Later on, he gave up practicing law to become a full-time writer. He started by writing his first book, ‘A Time to Kill.’ He based it on a case story of a twelve-year-old girl who had been raped and beaten, contemplating what would have been the result if the girl’s father murdered her assailants. He engaged himself in writing his second book, ‘The Firm’ which sold successfully becoming the best-renowned novel of 1991. However, he resumed his role as a lawyer in 1996, to represent a family that had a rail worker killed on the job.

In 2001, he wrote, ‘A Painted House’ followed by legal thrillers, sports fiction, and comedy fiction. In 2004, he wrote and produced the baseball movie titled ‘Mickey.’ Remarkably, in 2005, he earned the Peggy V. Helmerich Distinguished Author Award presented by Tulsa Library Trust.

Notably, in 2010, he started writing a legal thriller series titled ‘Theodore Boone’ which he aimed to entertain children of 9-12 years while educating them about the legal profession. Grisham has written several other stories including, ‘The Last Juror,' ‘The Summons’ and ‘Sycamore Row’ set in the fictional town of Clanton. Other novels not set in non-fictional settings include, ‘The Runaway Jury ‘and ‘The Partner.’

On May 8, 1981, Grisham married Renee Jones, and the couple had two children, Sha and Ty. His son, Ty played baseball at UVA. He is also a Baptist who believes that religious opinions should separate from politics. As a sports enthusiast, Grisham supports ball and has built a youth baseball complex and supports Mississippi State University baseball team. He also helps Virginia Cavaliers athletics on campus.

Grisham is also a political activist and a member of the Innocence project which campaigns to free unjustly convicted people. In 2013, he wrote a story about a wrongfully convicted person in Guantanamo in The New York Times magazine. He strongly opposes death penalties and believes sentences in the United States are excessive.

The Mississippi State University under the Manuscript Division has kept his room containing archived materials relating to his writings that he produced during his day. The Law Library has been renamed in his honor since 2012.