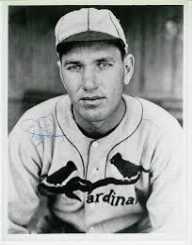 Jay Hanna Dean famously known as Dizzy Dean was born on January 16, 1910. He was a famous American professional baseball player who played as a pitcher. He played for several clubs in the Major League Baseball including St. Louis Browns, St. Louis Cardinals and Chicago Cubs.

He won thirty games in just a single season making him the last pitcher in the National League to ever record such a win. After retiring from an active baseball career, he became a television commentator for sports. In 2004, he was inducted into the Cardinals Hall of Fame. He died on July 17, 1974, at the age of sixty-four.

Dizzy Dean was born Jay Hanna Dean in Lucas, Arkansas on January 16, 1910. He went to school up to the second grade in a public school. He got the nickname ‘Dizzy’ because of his impressive personality and calm nature. In 1930, he made his first professional appearance in baseball and played in several major leagues. He was a skilled pitcher playing for the Cardinals.

Dizzy Dean began playing for the St. Louis Team famously known as the ‘Gashhouse Gang’ in 1934. By the end of the season, he had won thirty games. He led the team into a win against the Detroit Tigers in the National League pennant and the World Series. In their match against the Detroit Tigers, he recorded a 30-7 with a 2.66 ERA on the scoreboard.

Although his team lost to the Detroit Tigers in the 1934 World Series games four and five, he was able to lead his team clinch games six and seven. That year, the Cardinals won the series with Dizzy Dean accounting for their victory with two wins.

In 1937, in the All-Star Game, he suffered a fracture on his big toe while playing against the American League Cleveland Indians. In 1938, he signed a contract to play for the Chicago Cubs for 185,000 US Dollars. He led the Cubs to win the 1938 National League pennant.

Dizzy Dean got a selection four times in the All-Star Game in four consecutive seasons in 1934 through to 1937. In 1953, he was elected into the Baseball Hall of Fame. In January 2014, he was inducted into the St. Louis Cardinals Hall of Fame Museum.

Dizzy Dean married Patricia and settled in Bond, Mississippi after his retirement from broadcasting. He died on July 17, 1974, of a heart attack in Reno, Nevada. He was aged sixty-four at the time of his death and was laid to rest in the Bond Cemetery.