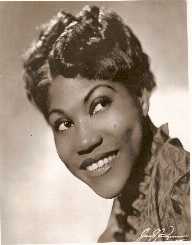 American singer-songwriter Sister Rosetta Tharpe was born Rosetta Nubin on the 20 March 2015 in Arkansas to Katie Bell Nubin and Willis Atkins. Tharpe’s mother was a singer and mandolin player as well as an evangelist for the Church of God in Christ.

Sister Rosetta Tharpe began playing guitar and singing as a very young child, performing Jesus is on the Main Line at the age of four. At age six, she began appearing with her mother, and they would play a mixture of gospel and other music. Tharpe became known for her guitar style which she adapted to her mother’s mandolin playing and the pianist Arizona Dranes. She was also influenced by Thomas A. Dorsey, a blues player who had started playing gospel music. She toured, along with her mother, in an evangelistic troupe that performed throughout the South.

In the late 1920s, they moved to Chicago, Illinois where they became part of the Holiness movement. After getting married in 1934 to Thomas J. Tharpe, she performed with him in southern Florida. They often appeared at the Miami Temple COGIC, and she also built up a following of radio listeners. In 1938, as Sister Rosetta Tharpe, she joined the cast of the fall 1938 Cotton Club Revue to wide acclaim. Headline acts were the Nicholas Brothers and Cab Calloway.

Sister Rosetta Tharpe signed a record contract with Decca Records and began appearing in concerts around New York City including the Paramount with Count Basie and the Apollo Theater in Harlem. Tharpe also appeared in From Spirituals to Swing in Carnegie Hall, New York City on the 23 December 1938 which was a black music event produced by John Hammond.

In 1940, Tharpe appeared at a racially integrated club in Greenwich Village, Cafe Society. The following year, she signed a contract to perform with the Lucky Millinder Orchestra and toured with them. She also recorded V-Discs for the U.S. troops. She left Lucky Millinder in 1943 to pursue a solo career.

During 1944, Sister Rosetta Tharpe recorded Strange Things Happening Every Day with Decca’s house band led by Sammy Price which was a hit. In 1946, she appeared at the Grand Ole Opry with the Fairfield Four in Nashville. The same year, she met gospel singer Marie Knight at a Harlem concert, and they began collaborating. The duo toured and released Didn’t It Rain which became a hit for them. Her duet with the Sam Price Trio, Up Above My Head became another hit for Tharpe, and she also had success with Beams of Heaven.

Tharpe then formed the Rosettes, consisting of a backup group of five singers. Their recording of White Christmas reached number six on the R&B Hit Singles Chart in 1949. They also toured with James Roots Jr., travelling on Tharpe’s tour bus. Tharpe and the Rosettes appeared on the Perry Como Supper Club show on the 1 January 1950. It was her first time on national television. In 1951, Marie Knight and Tharpe stopped collaborating musically, remaining friends.

Sister Rosetta Tharpe recorded a duet with Red Foley, a white country music star,  in 1952. Their recording, Have a Little Talk with Jesus, did not get much attention. In the mid-50, Tharpe started moving into the emerging R&B genre but her gospel fans were against it, and she was also unable to find an audience with the younger generation. At the same time, she was successful in jazz clubs. Her final recordings with Decca Records were made in 1956.

Tharpe travelled to England in 1957 and found a ready market for her music during the British blues revival and over the next three years, made several tours of England and Europe including France, Spain, and Germany. In 1960, she recorded Verve, Sister on Tour and The Gospel Truth. In 1964, she was back in England with the American Folk, Blues, and Gospel Caravan and she also appeared at the Newport Jazz Festival.

Sister Rosetta Tharpe performed at the festival again in 1967 and also did another tour of Europe. The following year, she released Singing in My Soul and Precious Memories. In 1972, she appeared at the Soul at the Center festival in New York. Shout, Sister, Shout: The Untold Story of Rock-and-Roll Trailblazer Sister Rosetta Tharpe by Gayle Wald was published in 2007.

Sister Rosetta Tharpe's music has left a lasting influence. Johnny Cash spoke of his appreciation of her music and how it had influenced him. Many others have cited her as an influence including Elvis Presley, Little Richard. Bonnie Raitt, Joan Osborne,  Chuck Berry, Eric Clapton, and Bob Dylan. Tharpe is considered to be one of gospel music’s first superstars. She was also the first gospel performer to record with a major record company. Shout, Sister, Shout the musical, debuted in at the Pasadena Theatre in mid-2017.

She was inducted into the Arkansas Black Hall of Fame in 2012. On the 1 January 2008, the governor of Pennsylvania announced that the 11 January would be Sister Rosetta Tharpe Day.

Sister Rosetta Tharpe was married three times. Her first marriage was to Thomas A. Thorpe (m.1934-d.1838). Her second marriage was to Fock Allen (m.1943-d.1947). And in 1951, she married Russell Morrison who was her manager at the time. After suffering a stroke in 1970, Thorpe had speech difficulties and also had to have a leg amputated. Despite her health problems, she continued performing until her death on the 9 October 1973.