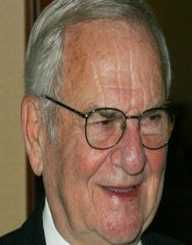 Lee Iacocca is an entrepreneur and former President and CEO of Chrysler. He is credited for engineering popular cars and saving the Chrysler company.

Lee Iacocca was born on October 15, 1924, in Allentown, Pennsylvania. His name at birth was Lido Anthony Iacocca. His parents, Nicola and Antonietta, were Italian immigrants. His parents were business owners including a restaurant, a theater, and a car rental agency. Iacocca shared his father's love for cars and skills in business.

Lee Iacocca graduated from Allentown High School, then enrolled in Lehigh University. He graduated in 1945 with a degree in industrial engineering. As the recipient of the Wallace Memorial Fellowship, he was able to attend Princeton University where he earned his master's degree in engineering.

Lee Iacocca started working at the Ford Motor Company in 1946 after graduating from Princeton. Even though he began as an engineer, he moved to the sales and marketing department where he showed his talent in that area. He also worked in product development. He is considered to be the Father of the Mustang as he was involved with the production of the 1964 model. In 1970, he was made President of the Ford Motor Company.

After conflicting with chairman and CEO Henry Ford II, he was fired from the company in 1978 after years of service to the organization. In 1979, he went to work for Chrysler Corporation. The company was on the verge of bankruptcy. Under his leadership as president, he was able to rebuild the company so that it could pay back the debt with the help of $1.5 billion in federal loan guarantees. The loan was unheard of for a private company, but it helped the company as it gained popularity. Chrysler was able to repay the loans in 1983.

Lee Iacocca wrote about his experience in his autobiography Iacocca as well as Talking Straight. Both books were best sellers, and a portion of the profits went to his foundation.

Lee Iacocca retired in 1992. He devotes most of his time to the Iacocca Family Foundation.

Lee Iacocca married Mary McCleary in 1956. The couple had two daughters. Mary died in 1983 from complications of type 1 diabetes. Iacocca then married Peggy Johnson in 1986. They annulled the marriage a year later. In 1991, Iacocca married Darrien Earle. They divorced after three years of marriage.

Lee Iacocca is an active supporter of diabetes research since the death of his first wife. He established the Iacocca Family Foundation in 1984.

Lee Iacocca was named one of the greatest American CEOs of all time according to the Portfolio.

Iacocca was fired from his job as president of the Ford Motor Company because of his difference of management style with Henry Ford II.